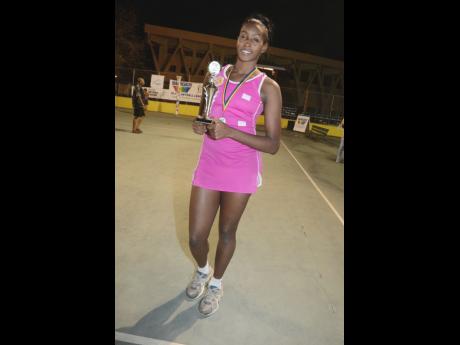 For the Sunshine Girl who is gearing up for this weekend's three-Test series against Barbados, her son is everything. As it relates to her mom, no one compares.

"My biggest motivation is my son. My mother is my hero," declared Facey.

"He gives me the drive whenever I feel like I need to quit or I need to give up. It's like he's like a vision. Whenever something goes wrong and I feel like it's time, it's like he's there saying, 'Mommy, you can't give up'," she declared of her five-year-old.

"Whenever I feel I'm going down or I feel depressed, he's there. I have to keep it strong for him," she added.

Facey reciprocates those feelings for her mother, Janet Reid.

"She's been there for me ever since," she stated.

"She's the one who's keeping my son right now," said Facey, referring to the times when she is away training with the Sunshine Girls or studying at the G.C. Foster College.

"She's so supportive and she's there. Mi just haffi love her!" Facey added.

Her passion does not stop there as she pours a great deal of energy into the clear number-one sport for females in this country.

"I had to choose between basketball and netball, and I chose netball," she admitted, noting the importance of playing for Jamaica.

"To be a Sunshine Girl is everything. To go and represent your country is such a wonderful feeling."

Already, the Kingston Hummingbirds and G.C. Foster College defender has been capped 17 times for Jamaica. A former Under-21 Jamaica representative, Facey's experience also includes playing at the Netball World Cup, Commonwealth Games and a Test series against Barbados.

For the May 19-22 series against Barbados, Facey, who plays the goalkeeper, goal defence and wing defence positions, is ready for action.

LOOK FORWARD TO THE SERIES

"I'm looking forward to the series," she said. "We're going out there to compete and we can't let Barbados beat 'wi'. Never! Because they're beneath us and they should stay there, because we're trying to be in the number-one spot right now, so we can't let a lower team (beat us). No matter if half of our players aren't here, we have to keep strong."

In terms of championing the world, Facey, who turns 24 in August, has strong belief in the Sunshine Girls' capabilities.

"I've a good feeling about it. We can do it, 'enuh'. We just need good resources and good support and a strong foundation to move forward," she observed.