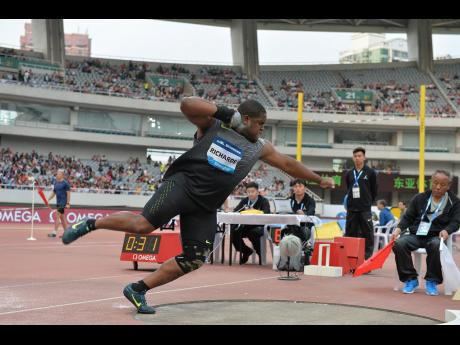 Asked about Petersfield High School standout Nedrick at the JAAA All-Comers meet at the National Stadium on May 13, Richards said, "I'm excited for him, and he's not the only one."

"That's what makes it so interesting," he said.

Richards has high expectations for Kyle Mitchell of Calabar, who preceded Nedrick as Boys and Girls' Championship Class 1 shot champion, and former Carifta champion Warren Barrett. "Mitchell is doing well," he said of the Calabar boy. "Warren is coming back into shape," he commented about Barrett who is recovering from a wrist injury.

Richards, who is 29, and who was visibly animated, said that he expects good things from Jamaican putters. "It's just set for an exciting future in throwing."

Nedrick has dominated the Class 1 shot this season. In his last campaign for Petersfield, the Machel Woolery-coached thrower achieved a Boys and Girls' Champs and national junior record of 20.65m. He was already the holder of the national under-18 record.

Nedrick and Mitchell took the top two spots at the Carifta Games in CuraÁao. Barrett was the champion in 2016, with Nedrick's former Petersfield teammate, Sanjae Lawrence, second. Earlier this year, Lawrence triumphed at the US Junior College Championships for Barton County Community College. The runner-up was another former Petersfield thrower, Stevon Crooks.

Richards held centre stage at Saturday's meet with his best throw of the season, 21.15m. For him, it was a step towards his distance goal of 22m.

A trim-looking Richards improved on his previous 2017 best of 20.74. When the shot put action was over, he spoke optimistically about the future. "Last year, I had a couple setbacks with injuries which, trust me, taught me how to fight," he said of a 2016 season in which he had to recover from knee surgery. "It taught me how to fight," the reigning Commonwealth and Pan-Am champion reflected, "and I'm still fighting but a little bit wiser now, and hopefully, this year will be better performances."

The holder of the national record at 21.69m has set his sights on longer throws. With that in mind, he wants to be consistent in the 21m range. "Twenty one is the new 20, so the target is 22," he explained. Noting that the US pair of Olympic champion Ryan Crouser, World champion Joe Kovacs and New Zealand's Tom Walsh are top class, he said, "It's exciting to compete against them, but O'Dayne Richards needs 22. I need 22m as well, and I'm focusing on that."

Crouser has the longest throw in the world this year at 22.15m.