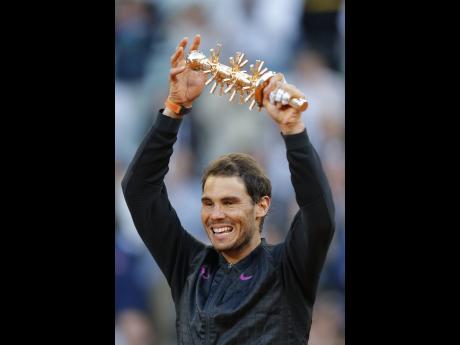 AP
Spain's Rafael Nadal holds the trophy as he celebrates winning the final of the Madrid Open tennis tournament in two sets, 7-6 (10-8), 6-4, against Austria's Dominic Thiem in Madrid, Spain,yesterday.

Nadal withstood a tough challenge from the ninth-ranked Thiem, converting on his fourth match point to earn his 15th straight victory on clay and tie Novak Djokovic's record of 30 career titles in Masters 1000 events.

The triumph at his home tournament gave Nadal his 72nd career title, and 52nd on clay.

It was Nadal's second straight win against the 23-year-old Austrian, coming two weeks after the Barcelona Open final when the fifth-ranked Spaniard cruised to victory in straight sets.

Nadal had easily defeated Thiem in Barcelona, losing only five games in a two-set victory, but was forced to work a lot harder yesterday.

In an even first set, Nadal had to save two set points in the tiebreaker. The Spaniard converted his fifth set point of the match to take that tiebreaker and go one set up. Nadal broke early in the second set but was not able to pull away, and needed to save four break points in the final game before closing out the match.

Thiem was trying to win his ninth title, and the first since winning the Rio de Janeiro tournament in the beginning of the year. It was his first final in a Masters 1000 event.

Nadal has a tour-leading 34 victories in what has been a superb season following lean years for the 14-time Grand Slam champion. He also made it to three finals, losing two of them to Roger Federer, including at the Australian Open.

Nadal, who was out for much of last year because of a wrist injury, has won 30 of his last 32 sets going into the tournament in Rome this week. Then he will try to win his 10th title at Roland Garros, where he won his last Grand Slam title three years ago.

He defeated Djokovic in the semi finals in Madrid, snapping a seven-match winless streak against the second-ranked Serb.