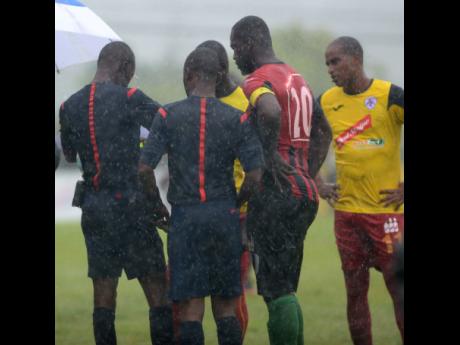 Arnett Gardens and Humble Lion will have to wait another day for the playing of their Red Stripe Premier League return leg semi-final match, which was postponed yesterday due to heavy rains at the Effortville Community Centre in Clarendon.

The game, which started 30 minutes late, was called off by FIFA referee Valdin Legister 10 minutes after kick-off with the score locked at nil all. The ball could not roll properly on the surface, and this led to the end of play. Organisers said that they would announce a date for the replay shortly.

Another issue arose before kick-off as both teams came to the venue prepared to play in red socks. League regulations do not permit opposing teams to wear socks of the same colour. However, this was solved when Arnett were given green pairs.

Arnett came into the return game with a 2-1 advantage, following their victory in the first leg a week ago at the Anthony Spaulding Sports Complex in Trench Town, Kingston.

Arnett Gardens head coach Jerome 'Jerry' Waite described the postponement as an act of nature and said that his team would go back to training to prepare once more for the Donovan Duckie-coached Humble Lion.

"It's nature, nothing! We have to just live with it. We will have to be ready for the game," Waite told The Gleaner.