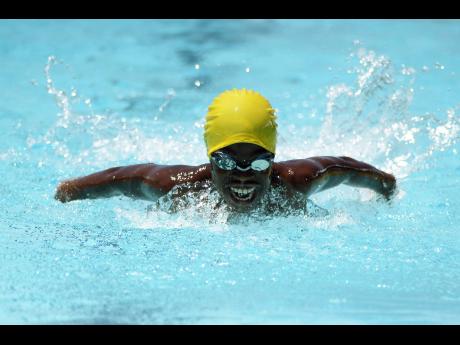 Head coach Cleon-Mark Stewart, who led Stella Maris Prep to this year's Burger King-Popeyes-YMCA Prep and Primary Schools Swim Meet title, says he is proud of his team for winning the two-day event at the National Aquatics Centre on Saturday, despite not being considered favourites to do so.

Stella Maris scored 410.50 points combined, in boys and girls 6-12 and under categories. They dethroned last year's overall champion, Immaculate Conception Prep, who held on to the girls category this year with 298 points, but had to settle for fourth overall.

"Winning this meet, we are very elated, as we weren't favourites. I think my swimmers did an awesome job to win by over 100 points, and it speaks well to our swim curriculum, which tries to unearth gems," said the coach.

"It's a work in progress, and we are very happy that the hard work paid off, "he told The Gleaner.

Stella Maris's 11-12 age group did most of the damage this year, and the coach remains confident that though they will be leaving the institution soon, his team will fight to defend their title next year.

Stella Maris had to settle for two second-place finishes with 188.50 points, behind Immaculate, the girls' champions, with 298 points, and one point behind Sts Peter and Paul Prep, boys' champions, with 193 points.

Over 50 schools competed and new champions were crowned in all categories except returning Girls' Champions Immaculate.

Sts Peter and Paul won the Boys' category in the absence of last year's winners' Wolmer's Boys, who did not compete.

They finished seventh in the boys section (50) and 10th in girls competition with 22 points.