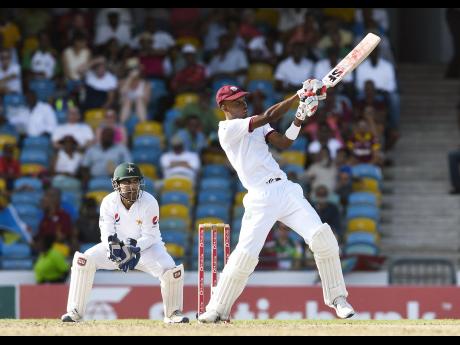 Prolific right-hander Roston Chase has leapt to a career-best position in the latest ICC Player Rankings, following his heavy scoring in the decisive third Test against Pakistan, which ended in defeat for West Indies on Sunday at Windsor Park in Dominica.

The 25-year-old, playing in just his 10th Test, top-scored with 69 in the West Indies first innings and again with an unbeaten 101 in the second to end the contest as the home side's leading performer.

As a result, he has jumped 21 places to 28th in the Test Batting rankings to become the highest-ranked West Indies batsman, overtaking opener Kraigg Brathwaite, who lies 30, following a poor series.

Chase was, by far, the leading scorer in the series, amassing 403 runs at an average of 100, with two centuries and two half-centuries.

Captain Jason Holder, who gathered 182 runs in the series at an average of 45, has moved up seven places in the batting rankings to 54th.

Leg-spinner Devendra Bishoo also saw upward movement in the rankings, jumping three places to a career-best 26th. He took two wickets in either innings of the Windsor Park Test.

He is the second-highest-ranked West Indies bowler, with speedster Shannon Gabriel at 19th.

There is no change to the top five of the batting or bowling rankings, with Australian stroke-maker Steve Smith and India left-arm spinner Ravi Jadeja holding top spot, respectively.