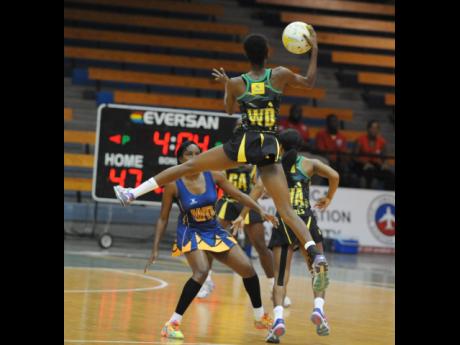 Contributed
Jamaica's Sunshine Girls in action versus Barbados at the National Indoor Sports Complex in a three test series in 2015. Jamaica won the series 3-0.

Some of the nation's most exciting talent will be on show when the Sunshine Girls take on Barbados in a tri-Test netball series against Barbados, which takes place this weekend at the National Arena from Friday, May 19 to Monday, May 22.

The 15-member Jamaica squad Sunshine includes not only seasoned campaigners, but many who have starred while representing Jamaica at junior levels - especially Under-16 and Under-21 - such as Caralee Tinglin, Zonasha Hinds, Rebecca Robinson, Melissa Hinds and Jodiann Ward.

The 15-member squad includes three members of the national Under-21 team, which is preparing for the upcoming World Youth Netball Championships next month.

Thristina Harwood, an attacking player who either plays at goal shooter, goal attack of wing attack, is the most experienced player on the team, with 22 caps. Defenders Stacian Facey and Shamera Sterling are two of the other regular team members, with 17 and 12 caps, respectively.

Centre court players Kerry-Ann Brown and Adean Thomas also have a fair bit of senior level experience representing Jamaica, which is hosting the series to assist Barbados' preparation for the Commonwealth Games, plus gearing towards the Caribbean Championships, to be held later this year.

The Jamaica team has been preparing for nearly three weeks under the guidance of new coach, Jermaine Allison-McCracken.

Admission will be $500 for adults and $200 for children, while there is a special discount for school children in groups, who will be charged $100 for entry.