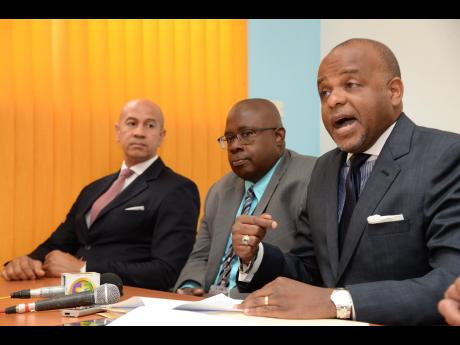 In what can be described as a rare press conference, the chairman of the Jamaica Anti-Doping Commission (JADCO) explained the reason behind the withdrawal of an appeal lodged by his commission against the decision by an Independent Anti-Doping Disciplinary Panel, which ruled, after a lengthy hearing into allegations by JADCO, that popular Jamaican cricketer Andre Russell had breached the WADA-inspired Anti-Doping Code by failing to file his whereabouts on three occasions in a one-year period in 2015.

At the conclusion of the hearing, the tribunal decided that Russell had indeed breached the code and banned him from cricket for a period of 12 months. My understanding of the reason for the appeal (after listening to the executive director of JADCO, Carey Brown, speaking on a local radio programme) was that the tribunal failed to lodge written reasons for its decision. This was widely surmised to be an appeal against the leniency of the suspension. This perception resulted in a sustained media led campaign that seemed to suggest that JADCO was on a mission to persecute not only Russell, but Jamaican athletes as well.

A cross-appeal filed by the legal team of Russell against the suspension also helped to grab the attention of the chairman of the commission and his board of directors. According to reports, a legal opinion of the appeal and counter-appeal by the legal teams involved in the hearing was sought, and the advice from Attorney General Marlene Malahoo Forte was that the tribunal could, in fact, increase the ban from one to two years. Could this have been the herald of panic at the board level, wherein the perception that JADCO was, in fact, on a campaign to persecute Russell?

Brown, after learning of the suspension, seemed (if the JADCO chairman is quoted correctly) to go off on a frolic of his own and instructed the lawyer of JADCO to file the appeal! Lackston Robinson has been the legal luminary tasked with advising JADCO on legal matters from as far back as I can remember, and has maintained his position at JADCO despite the many changes at board level. Thus, the decision to get "another opinion" appears strange and unusual.

The chairman of JADCO intimated in his press conference that public outcry pushed the JADCO board to act in the manner that it did. I have often heard that 'the voice of the people is the voice of God' and this saying seems to determine the actions of politicians who recognise very early in their political life that without power, very little can be achieved. However, some 2,000 years ago, public outcry at the conclusion of a hearing into accusations against a local preacher resulted in the preacher being sentenced to be crucified in exchange for the freedom of an accused murderer and rapist. Thus, if public perception is that JADCO is against Jamaican sports stars, the life of the board would go on life support in very short order.

So, as the chairman of the Independent Anti-Doping Disciplinary Panel stated two Mondays ago, "In view of the file of notices of withdrawal of the appeals served on the anti-doping secretariat, the matters will not proceed."

This means victory for popular sentiment, and a victory for Russell and his legal team. They no longer have to fret on the possibility of a further suspension, if the attorney general's opinion is correct - a conventional win-win outcome.

But "what about Naomi?" What about the executive director and, for that matter, the lawyer contracted to JADCO? Must every decision that they make in pursuance of the often-stated role of "educate and facilitate compliance with the WADA code and to weed out drug cheats and ultimately Jamaica's reputation worldwide, by acting in the best interest of the athletes and, ultimately, in the best interest of Jamaica", be okayed by the board before implementation, in case there is a public outcry?

The next question would be: What does WADA and other anti-doping organisations worldwide think of our programme "to facilitate compliance and to weed out drug cheats"?

We do live in interesting times.