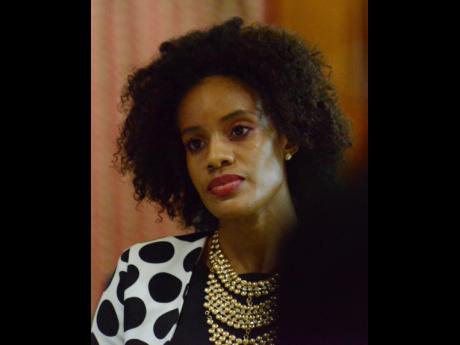 Jamaica's Olympic 400-metre hurdler Kaliese Spencer will know her fate in just about a month's time after her anti-doping rules violation hearing was wrapped up at the Jamaica Conference Centre yesterday, where the athlete faced a testing 90-minute cross-examination.

Four witnesses were called before the Kent Gammon-chaired Independent Anti-Doping Disciplinary Panel, which will present its decision on June 15, 2017 following the second day of proceedings into the matter. Written submissions are scheduled to be presented on June 2, 2017. Spencer is facing a four-year ban.

Spencer, who is alleged to have violated article 2.3 of the JADCO Anti-doping Rules 2015, which speaks to "evading, refusing or failing to submit to sample collection", was placed under the microscope by Jamaica Anti-Doping Commission (JADCO) attorney Lackston Robinson, who sought to point out several discrepancies in the athlete's witness statement, while seemingly bringing her credibility into question.

However, Spencer's attorney Paul Greene was quick to underline after the hearing that JADCO failed to establish that Spencer was properly notified that she was required for testing, adding that he was happy with the timelines established going forward, which he notes will give the athlete a chance to compete at the National Championships with an eye on a World Championships spot.

While giving her account of what transpired on the day in question - April 27, 2016, Spencer argued that she was never approached by JADCO testers, who had turned up at her then training base at Stadium East. She insisted that the group, led by Sample Collection and Testing manager Tajae Smith, had all opportunity to notify her of their intention to take a urine sample from her for testing purposes.

Spencer further noted that she was later informed by her manager, Marvin Anderson, that the JADCO officials wanted a sample from her, while she was driving home from training, close to two hours after the JADCO team had arrived at Stadium East.

The athlete continued by telling the panel that upon hearing from Anderson, she then started to make her way back to Stadium East before receiving another call from Anderson, where she was instructed to meet at the JADCO office in Half-Way Tree instead.

There, she met executive director of the anti-doping watchdogs, Carey Brown, along with her then coach Bert Cameron and fellow teammate Riker Hylton, who is also facing similar charges. Close friend and training partner Christine Day was also with her at the time.

Robinson, however, sought to establish that Spencer's witness statement, and particularly her argument that she was never notified by the JADCO officials that she was needed for testing, while at Stadium East, was not truthful, raising and pointing to several conflictions between her original statement and her account before the panel. In her defence, Spencer pointed out that she simply did not remember some of the details of the day given that the incident occurred a year ago.

Greene, who also called to the stand Spencer's friend for over a decade and training partner Christine Day, Jonique Day, as well as the athlete's former coach Bert Cameron, who JADCO sought to argue had told Spencer that she was to be tested - a point which was denied by the coach, underscored his assessment of the hearing.

"All of them (JADCO officials) admitted under oath - Mr Carey Brown, Tajae Smith and Wilmot Rowe - all admitted that she was never notified under the WADA international standards under Article 5. Notification is when the period begins when the athlete is required to remain for testing. They all admitted that she was never notified by anyone from JADCO and that was clear in their testimony," Greene said.

"We are hopeful; you always have to be hopeful. Certainly, the panel is a world-class panel, and we are happy with the way things went, and we appreciate the opportunity to be heard so quickly. The hearing is over and will be done on a timetable that will allow Ms Spencer to come back and compete at nationals and have a chance to go to Worlds. Assuming we win and even if we don't prevail, we will have an opportunity to go to CAS and seek a stay which would allow her to compete at nationals, also so we are thankful for that timetable," added Greene.

The other members of the panel are Herron Dale and Dr Donovan Calder.

Brown, Smith and Rowe, along with Spencer, were all heard on Monday's opening day of the hearing.