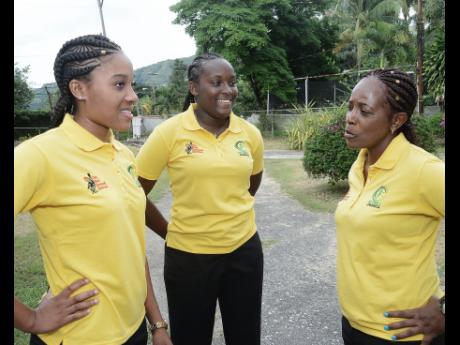 For some people, some things are bound to happen. It is not a matter of if, but when.

Playing for Jamaica at senior-level netball is one such thing and the impending three-Test series against Barbados could provide that moment for Carlalee Tinglin.

It is not the first time that she has been part of a senior Sunshine Girls squad. She toured England with the team that won the Vitality Series last year. However, she never graced the court.

This is the next national level for Tinglin, a dominant centre court player from St James.

From age 11, while attending Corinaldi Avenue Primary in Montego Bay, she has been in the national programme and has represented Jamaica at Under-13, Under-16 and Under-21.

"I've been achieving great things. From primary school, I've won everything - MVP, any little competition that I play in I've been the MVP," she continued.

As she hails from Montego Bay, Tinglin has been making the long trek for years.

"Sometimes I don't like it, but I got used to it because I have been doing it from such a tender age. But I had to do what I had to do," she admitted of her travels to enhance her talent and career in netball.

"This is what I've always been dreaming of," she said, of actual playing time as a senior Sunshine Girl.

"At short notice, I just joined the team, so I'm a little nervous. But I'm going out there to do my best."

READY TO MAKE HER MARK

The Barbados series, which runs from tomorrow to Monday, May 22, seems ripe for Tinglin to make her mark.

Highlighting her role, Tinglin said: "Not only defensively in the games, but goals win (matches), so you've to ensure that you take down the ball to the goalshooter so that your team can score. So you've to be on the ball and be ready for anything."

She wants to add to her assets.

Off court, she is pushing hard while on scholarship at the University of the West Indies, in pursuit of a degree in early childhood education.

"I see myself as a Sunshine Girl, but I want a strong career in teaching," said Tinglin, whose mother is a teacher.