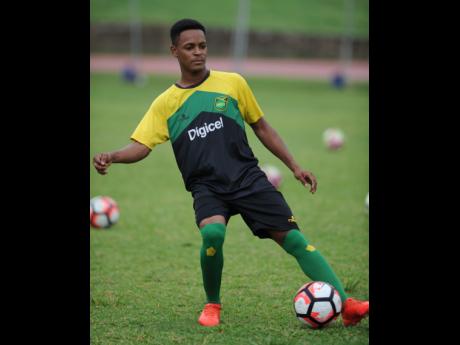 Alex Marshall, one of five schoolboys called up to the Reggae Boyz training squad now preparing for an international friendly against Peru in July, is hopeful of getting into the final squad and making his senior debut.

"I am looking to learn from the (senior) players ... . They (public) say I need to play in the Premier League to get that experience, so coming here and training with them (players) will show me where I'm at," he said.

Marshall captured the hearts of Jamaicans in the 2016 schoolboy football season, and since then, local football fans have been pushing for him to make the next step. The former St George's College Manning Cup star was called briefly by former national boss Winfried Sch‰fer, but he was never played. However, he is looking to impress coach Whitmore this time.

"I just have to show my talent. They (coaches) must have seen something in me to call me, so I am just going to display the talent I have been showing over the past weeks (KSAFA Super League), and hopefully, with God's help I will be selected for the team," Marshall said.

Meanwhile, Whitmore has insisted that Marshall and the other schoolboys - Javain Brown, Jourdaine Fletcher, Rodave Murray and Fabian Grant - are players for the future and must be given experience and exposure to develop.

"Alex is one for the future, but he has a long way to go. He came up through the system, having played Under-15 and Under-17, and he's looking to make the transition. With time and more international games, he will grow," Whitmore stated.