Fort Knox to go all the way 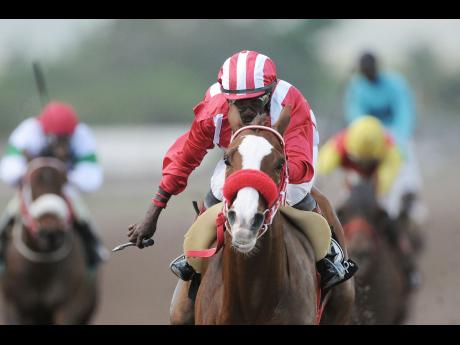 FORT KNOX will give Sunrise-6 players a flying on tomorrow's 10-race programme at Caymanas Park.

The Philip Feanny-trained filly won by six lengths on April 15, when clocking 59.3 for 1000 metres round, the same distance she will tackle tomorrow. FORT KNOX has been burning up the exercise track since that run, going 1:00.3 for 1000m flat on May 13, beaten only a length by top-rated stable companion Campesino.

Wayne DaCosta's LOOSE CANNON was also impressive at exercise on that day as he breezed the last 1000m out of the 1800m chute in 1:00.0. FORT KNOX is definitely the faster of the two horses, however, and should go all the way.

CAPTAIN CUDJOE and newcomer LOLA GREY will decide the top spot in race two, a maiden event over 1100 metres. The latter, a full sister to two-time winner Kaci, has not shown a great deal at exercise, but does not have to be a world beater to finish in front of this very moderate field with Robert Halledeen aboard. CAPTAIN CUDJOE has performed well on his last four starts including a 1:16.1 clocking for 1200 metres behind Profile on March 25, and will be a big danger.

The low draw and top weight are two big disadvantages for ARGUMENT DONE in the third and BULLET RAJ is tipped to make a winning return to the lowest claiming group.

ARGUMENT DONE has also come down the claiming ladder, but 57kg may prove too heavy. The American-bred eight-year-old horse finished in front of BULLET RAJ on May 6, but on this galloping course, the latter will use his early speed to full advantage.

TOP EAGLE has shown a distinct likeness for two-turn races and the fit four-year-old colt is ready to go from gate to post in race four over 1820 metres.

Jockey Shane Ellis is expected to dictate the early pace before going clear of rivals 800 metres out. Front-running tactics were tried aboard TOP EAGLE on May 6 over 1600 metres, but he was caught close home by Cup Of Tea. In this milder pace, Ellis will be too far ahead to be caught when they make the final turn.

FIFTYONESTORM and GOLD MEMBER meet again over 1000 metres straight in race five. Only a neck separated them when they finished third and fourth, respectively, behind CRUISING MOTION on May 6. GOLD MEMBER was slowly away on that day and will be hard to beat if he breaks with the field tomorrow over the same course and distance.

Ian Parsard's BALLERINA STEEL should not be opposed in the sixth. She showed nothing on her April 1 debut, but has been impressive at exercise since, and with just 48kg on her back will turn out to be an easy winner.

The three-year-old filly who was purchased for $3 million in 2015, worked alongside top campaigner Superluminal on Sunday, clocking 101.1 for 1000 metres. She is also a half sister to Zacapa, who clocked 1:20.0 for tomorrow's distance on her second outing.