Thornhill Miss will be tough to beat 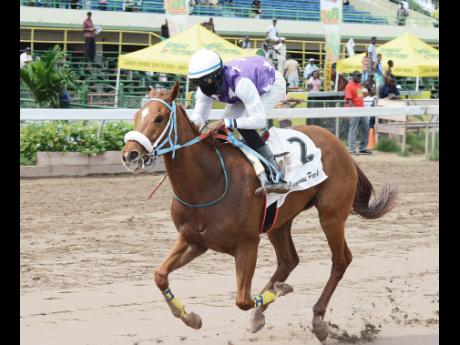 THORNHILL MISS will relish the underfoot conditions should the rains persist throughout this afternoon's 10-race card. The chestnut filly faces seven rivals in the 1100-metre Titania Trophy after a big fifth-place run behind colts last Saturday.

Running on a wet track on her second outing as a two-year-old last November, THORNHILL MISS scored an uncontested three-length win against TOUGH COOKIE and third-placed GREAT FAITH, who had beaten her on debut two weeks earlier.

She returned off a three-month lay-up to make her three-year-old debut in the 1200-metre Hotline Stakes on February 25, finishing fourth, heads on with LADY FAYE and FORT KNOX in a bang-up for the minors behind four-length winner RUNALLDAY.

Stretched out in the 1400-metre Thornbird Stakes and the 1000 Guineas at a mile, she raced prominently for the first half-mile in both races before fading. However, she ran surprisingly well in the 10-furlong Jamaica Oaks on April 29, staying third to the last furlong behind runaway winner MARLENE MY LOVE and BILINGUAL.

An April foal, she had just turned three in time for the Oaks and followed up that run with a sterling effort last Saturday, the only filly in a tight finish at 1000 metres straight, beaten a length behind CAPTUREMYSHIP, ICTUS, WONG DON and AKASH - all progressive colts.

Returning in the fillies-only Titania Trophy on an expected wet track, THORNHILL MISS will be tough to beat, especially with front-running lightweight jockey Wesley Henry.

Running against colts last week, she disputed the lead from start to finish, coming from postposition four. The form of that race must be taken seriously, considering the manner of CAPTUREMYSHIP's previous eight-length win, followed by his narrow loss to SECRET TRAVELLER, a race in which AKASH was only a length behind.

Philip Feanny's LIGHTNING LILY is expected to start favourite, but had finished eight lengths behind SECRET TRAVELLER, CAPTUREMYSHIP and AKASH on April 29, the same calibre of colts who THORNHILL MISS carried almost to the wire last week.

However, watch out for Richard Azan's unknown, SWEET PEPPA. He could spring a surprise, having won in a fast 59.2 at 1000 metres straight on May 10.