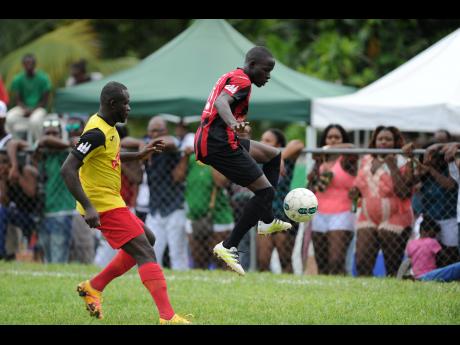 The Junglists went into the game with a one-goal lead after they won the first leg 2-1 at the Anthony Spaulding Complex two weeks ago. They advanced to the final on a 3-1 aggregate.

In-form striker Fabian Reid netted for the winners when he slotted past Humble Lion's goalkeeper Khadeen Davis in the 72nd minute.

Humble Lion got a glorious chance to come back into the game as FIFA referee Valdin Legister pointed for a penalty after Arnett's skipper Oneil 'Bigga' Thompson handled the ball inside the 18-yard area. Thompson was shown a yellow card and will miss the final because of an accumulation of cards.

Reid, who celebrated his call-up to the national men's senior team with his fifth goal in the last four games, and 10 goals for the season, was naturally elated.

"It was a big boost for me after the call-up to the national team. I was very determined to come here and finish the job for the team," the 25-year-old Reid told The Gleaner.

"I was ready to do it. I spent two years in the Trinidad and Tobago league and the experience from there helped me, so I was committed to come back to Jamaica and win the national league and also gain a call to the team," he disclosed.

Coach of Arnett Gardens, Jerome 'Jerry' Waite, said his team had been confident of getting a win at Effortville.

"Arnett are at their best when it comes to this stage in the competition," Waite said. "We lost to them in the early part of the season, but we made some tactical adjustments, and won both games in the semi-final," he reasoned.

Waite is now looking forward to the final against either the University of the West Indies (UWI) or Portmore United.

"It wasn't to be. It was a tough, long season. We had our moments, a missed penalty, followed by a sitter," Duckie said.

"We did well, but kudos to Arnett. The championship title has eluded us again. We just have to try again," he added.

Humble Lion failed to make the final after three consecutive losses at the semi-final stage in the RSPL.

The return-leg semi-final between UWI and Portmore is scheduled for Sunday at the UWI Bowl in Mona. UWI won the first leg 2-1 at the Wembley Centre of Excellence in Clarendon two weeks ago.