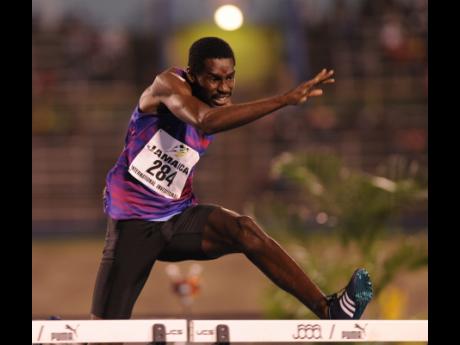 Ricardo Makyn
Kyron McMaster of the British Virgin Islands in the 400m hurdles event at the Jamaica International Invitaional meet held at the National Stadium on Saturday.

WITH so many top international athletes on show at the Jamaica International Invitational Meet inside the National Stadium last Saturday, not many local fans knew about Kyron McMaster of the British Virgin Islands, but after the Men's 400m hurdles event, his name will be now been known locally and around the world.

A year ago, at the IAAF Under-20 Championships, formerly known as the IAAF World Junior Championships, which happened in Bydgoszcz, Poland, the 20-year-old athlete was a bronze medallist, finishing third in the intermediate hurdle in 49.56 seconds, behind gold medallist Jaheel Hyde who won back-to-back titles in 49.03 seconds.

No one had their eyes on this youngster on Saturday night, but running a big race, he surprised the field to win the event in a personal-best and world-leading time of 47.88 seconds, and in the process relegated Hyde to second. Hyde also ran a personal best of 48.52 seconds, which is now at number three on the world list.

McMaster, several minutes after his achievement, told The Gleaner that he was very pleased with what he did, despite being a bit surprised at the feat.

"I am a little bit surprised with my win and time, seeing that the field had so many experienced athletes who had performed well in the past, at the highest level", said McMaster. "My main focus was to just come into the race and execute, and I was hoping for the best," he continued.

Asked if he was also surprised to beat Hyde, his reply was: "This is a competitive sport and I have been training hard for this, as Hyde has been a target at such a young age. To beat him, for me it was exceptional and I felt really good," he said.

Asked what it meant for him now being atop the world, his response was: "It makes me feel very good, as I have been having a good season so far, as my season's best coming into the meet was 48.69 seconds, done in Gainsville, Florida, where my time was number three on the world list. Now I am really motivated to continue working harder, as now I will be a targeted man," he said.