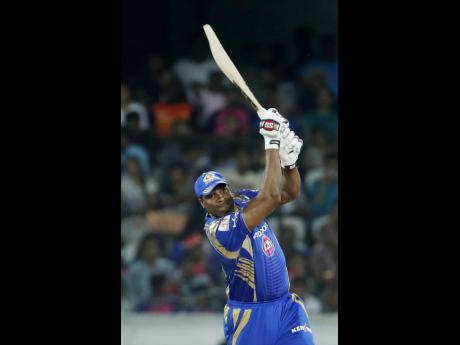 Limited to 129 for eight off their 20 overs after opting to bat first at the final at the Rajiv Gandhi International Stadium, Mumbai then managed to defend the smallest-ever total in an IPL final, as RPS squandered a golden opportunity for a title in their final season as a franchise.

They started the final over requiring 11 for victory and Manoj Tiwary lashed a boundary before holing out to Pollard at long on for seven off Australian left-arm seamer Mitchell Johnson.

The key moment arrived when captain Aussie Steve Smith was taken at cover for a top score of 51 off the very next ball. Mumbai scrambled three runs from the next two deliveries, leaving them with four to get off the last ball.

Dan Christian (4) then swung a full length delivery to backward square but could only manage two runs, handing Mumbai a nerve-jangling victory.

Earlier, RPS had lost Rahul Tripathi cheaply for three with the score on 17 in the third over, but Smith and opener Ajinkya Rahane (44) put on 54 for the second wicket to revive the innings.

Johnson, with three for 26, and seamer Jasprit Bumrah, (2 for 26) kept things tight, however, and RPS failed to accelerate when needed.

Mumbai had also lacked acceleration earlier and finished on a modest total, with Krunal Pandya top-scoring with 47 off 38 deliveries and captain Rohit Sharma getting 24.

Simmons was one of two wickets to fall in the day's third over, caught and bowled by left-armer Jaydev Unadkat (2-19) low to his left off a leading edge for three, at eight for two.

And Pollard, batting at number six, was also one of two wickets to perish in the 11th over when he holed out to long on off leg-spinner Adam Zampa (2-32) after clearing the ropes at long off a few deliveries earlier with the Aussie.