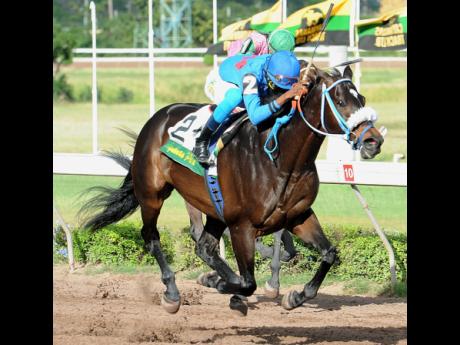 PERFECT NEIGHBOUR, one of the country's top-four distance horses, gets his favoured route course, going nine furlongs and 25 yards in the Mark My Word Trophy, co-feature with the traditional Labour Day Trophy on the 10-race holiday card.

Though getting on in age at seven years old, PERFECT NEIGHBOUR remains one of the best two-turn horses in the country, finishing fourth in November's Superstakes behind disqualified winner FRANFIELD, BIGDADDYKOOL and SEEKING MY DREAM.

Down in class among open allowance horses and with none of his grade one rivals around, Wayne DaCosta-trained PERFECT NEIGHBOUR is a sound favourite to outstay Ian Parsard's SUPERLUMINAL.

SUPERLUMINAL will try making all but the handicaps are in PERFECT NEIGHBOUR's favour - an eight-pound swing from their last meeting - October's Governor General's Stakes in which DaCosta's runner was 11lb heavier and had finished a length-and-quarter ahead of Parsard's charge.

In addition, DaCosta has a battalion of five horses in the event, four of whom will make things tough for SUPERLUMINAL to get a breather from start to finish.

Omar Walker is aboard PERFECT NEIGHBOUR for DaCosta. The champion pair is also tipped to land the 1200-metre Labour Day Trophy with speedy LITTLE BIG HORN.