Thompson set to step on the gas 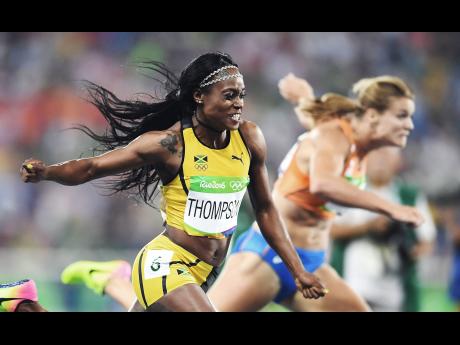 THE 2017 IAAF World Championships is ten weeks away but on Saturday track and field fans can see a preview of one of the top events when the world's best in the women's 200 metres clash at the Diamond League in Eugene, Oregon.

Jamaica's Olympic champion Elaine Thompson will get top billing. Just last weekend she ran a season's best while equalling the world lead with a 22.09 seconds clocking at the Jamaica International Invitational meet.

Thompson will be joined in Eugene by last year's winner Tori Bowie of the United States, the joint fastest woman this season over the distance. She clocked 21.99 to win in 2016.

The defending World champion, Dutchwoman Dafne Schippers, the fastest woman in the half lap in the event in 2015 with 21.63 and 2012 Olympic Games champion, American Allyson Felix, will also be there.

Thompson who won gold in Rio a year ago at the Olympics in 21.78, defeating Schippers (21.86), beat the Dutchwoman at the recent Doha meet and will be gunning to maintain her dominance over her main rival.

Both will be wary of Bowie. A year ago Bowie won ahead of Schippers and Thompson.

Shaunae Miller-Uibo, the Olympic 400m queen, and Felix, have been seen more over the one-lap distance recently but can win if they hit top form.

This track is quick and a very fast time is expected. Thompson has been in fantastic form this year and she is yet to really step on the gas. She could do so on Saturday.