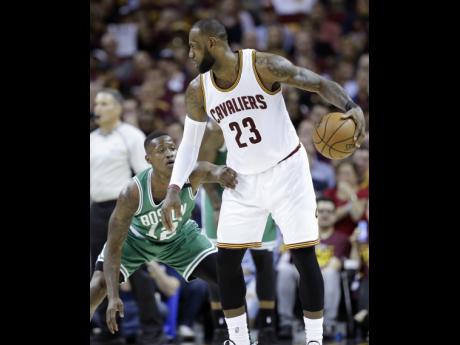 AP
Cleveland Cavaliers' LeBron James (23) looks to drive on Boston Celtics' Terry Rozier (12) during the first half of Game 4 of the NBA basketball Eastern Conference finals on Tuesday.

It took 10 games and halfway through the third round of the NBA playoffs before the Cleveland Cavaliers finally encountered their first true dose of resistance this postseason.

After cruising to a 2-0 Eastern Conference finals lead over Boston, the Cavs were humbled at home in a Game 3 loss, and needed a 42-point night from Kyrie Irving to battle back from a 16-point hole and win Game 4.

The chatter about an NBA Finals' matchup of two teams with unblemished playoff records is gone, but the challenge from the Celtics has sharpened the focus of the defending champs. Cleveland are expecting another unflinching effort in Game 5 from a Celtics team that isn't backing down despite facing a 3-1 deficit in the series.

"The close-out game is always the hardest.and Boston is going to make it even harder," said LeBron James, who rebounded from a playoff-low 11 points in Game 3 to score 34 in Game 4.

James had been saying that he felt like the Cavs needed to go through some adversity after a blistering 10-0 start to the postseason.

The way they responded Tuesday night - particularly on the defensive end - is a good sign for their prospects of wrapping up their third straight Eastern Conference crown tonight.

While Irving's scoring ignited the Cavs' comeback, it was made possible thanks to Cleveland's defensive effort over the final 24 minutes. Cleveland limited the Celtics to 41 per cent from the field and 29 per cent from beyond the arc.

If the Celtics were playing with house money heading into the series, they are flush with it again as they return to the Garden.

They've given themselves a chance to erase the sting of their 44-point loss in Game 2. The Celtics are also guarding against ending their season by having to watch the Cavs celebrate a conference title on their home floor.