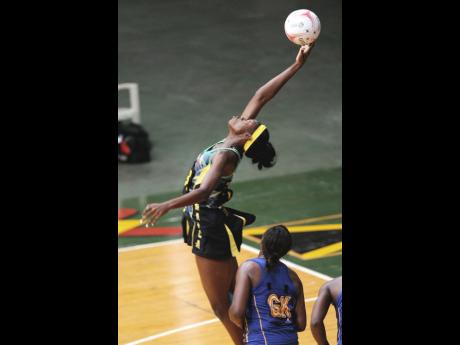 Shimona Nelson is learning what is takes to stand up to the challenges of the senior netball game.

The 18-year-old goal shooter only started playing the game three years ago, while attending Meadowbrook High School, but has rapidly moved up to the senior level.

"At first when I got called for the national Under-21 team, it was a bit difficult, but because I was determined to put in the hard work, it became natural for me to keep working hard and putting in the extra hours that I needed," Nelson expressed.

"Playing on the senior team is a lot of work. Sometimes, you may sit on the bench and think it's easy. You have to work extremely hard, you have to be determined, you have to be able to be mentally tough and physically tough," she noted.

The teenager played in the just-concluded tri-Test series against Barbados at the National Arena, which ended 1-1 after Friday's 44-44 draw, Sunday's 40-34 win for Jamaica and Monday's 42-41 victory for Barbados.

Playing the second half of the final contest, the teen scored 10 of 12 shots. Jamaica's other scorers were Thristina Harwood, who netted 23 of 28 attempts, and Rebekah Robinson, who sank eight of 12 tries.

It has been a particularly bruising experience for Nelson, with the shooter taking a battering under the pole against the senior Barbados defenders, who play a very physical game. Despite this, she averaged the best scoring rate among the Jamaican shooters in all the matches. However, she took some hefty hits and lost the ball on several occasions under pressure due to her handling.

"It has been challenging for me because it's the first time playing at the extreme real elite level," she offered.

The experience is invaluable as Nelson will, no doubt, utilise the lessons learnt at the World Youth Netball Championships, at which the Under-21s will represent Jamaica in Botswana next month.

"Even though it has been so tough, I've tried pushing through and it did help. So from this game, I'm going to take a lot of things from it, from the senior team series to the Under-21 tournament in Botswana. So this has been a stepping stone for me," she reflected.

"I've learnt how to stand strong, how to hold my position and shoot under pressure, and that's what I need for the Under-21 tournament."

During Monday's final game, especially in the third quarter, Nelson came under strong pressure with the team finding it difficult to score or get her the ball under the hoop.

"Sometimes, I was not in the right position and that was a problem for me," she admitted.

Nelson wants to get to the world's top leagues in Australia and New Zealand.

"I see myself going to the ANZ League just like Romelda (Aiken) and Jhaniele Fowler. I just need to keep working hard and be persistent in training," the youngster noted.