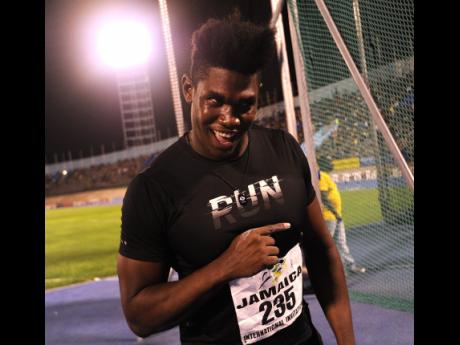 The 2017 Jamaica Invitational had something for everybody. Elaine Thompson, Yohan Blake and Canada's Andre De Grasse turned on the speed for the sprint fans. Novlene Williams-Mills touched hearts and burned heels in the 400 metres.

American Sam Kendricks, the Olympic bronze medal winner, showed Jamaica what pole vaulting is all about with clearances of 5.70 and 5.80 metres. Those are the highest vaults ever on local soil.

Despite all that, Fedrick Dacres had the biggest win of the night. He arrived at the National Stadium as the world leader, thanks to his Jamaica record throw of 68.88 metres at Excelsior High School in February. Yet, when he entered the ring for his final throw on Saturday, he was trailing the mark of 64.48 metres by US Olympian Andrew Evans.

His response to the pressure was like a Malcolm Marshall express delivery at the death. Collecting himself technically, Dacres projected his disc to a winning distance of 66.36 metres. It was high drama.

The win showed that the University of the West Indies student athlete could perform under pressure that is part and parcel of big-time throwing. While he has thrown further in the past, this was a fine effort for a contest that took place inside a stadium where discus-friendly quartering winds are absent. Finally, he spun past 65 metres, often the dividing line at major championships between finalists and non-finalists and medal winners and the rest.

All in all, it was a sign that Dacres, a boy wonder with gold at the World Youth and the World Junior Championships, is ready to come of age.

Dacres had a terrible time at last year's Olympic Games. Hampered by a late-season hand injury and cautious in a rain-sprinkled throwing circle, he crashed out of a final most expected him to reach. After all, in 2015, he had won the gold medal at the Pan-Am Games and reached the World Championship final in Beijing.

So this Invitational win is as much as a confidence booster as Blake's controlled 9.93 seconds triumph in the 100 metres. It seemed that a return to sub-9.9 form is imminent, given a noticeable easing off the throttle by Blake near the end. Good things may well lie ahead for a man who has patiently fought his way back from serious injury.

Yet, as good as Blake, Thompson, Williams-Mills all were, the clutch performance by Dacres is probably the most significant of all the Jamaican wins last Saturday. He stood his ground under pressure and cranked out an excellent winning throw. Most important, Dacres showed the quality champions have - grit.