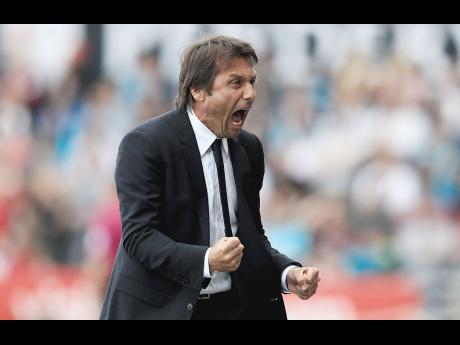 Antonio Conte acknowledges that it's been a great first season with Chelsea, the new English Premier League champions.

It could have a sweeter ending tomorrow if they could take the FA Cup, too.

The ability of the managers' manager of the year to get his side up for a second big match in a fortnight will be key.

Chelsea have been in party mode for two weeks, since clinching the league then a week later lifting the trophy at home in the final round.

"The real danger for us is to think that the season has finished," Conte says.

"It's important to celebrate and enjoy this moment, but ... I'll try to push a lot to explain that this season is already great, but this season can become fantastic if we're able to win the FA Cup. We must find the right motivation."

Facing Arsenal in the final at Wembley reminds when Conte turned around Chelsea's season.

Chelsea were eighth in the league in late September after they were humbled at Arsenal 3-0. Midway through that game, he made a tactical switch that would prove pivotal. Chelsea would thrive in a 3-4-3 formation, and claim 83 of a possible 96 points from that moment, including a 3-1 home win over Arsenal in February.

Conte has shown a preference for fielding three central defenders in his career, but he is far from predictable or rigid.

There are subtle yet significant variations to the formations he deployed with Juventus, Italy, and so far at Chelsea. All relied on a back three, but Conte has adapted to the attacking players at his disposal.

At Juventus, the attack centred on the dynamism of central midfielder Paul Pogba.

At Chelsea, it is winger Eden Hazard who has received the most freedom in Conte's system.

With Hazard and the formation, Conte can follow in the footsteps of Italian compatriot Carlo Ancelotti, who won a domestic double in 2010 in his first season at Chelsea.

Ancelotti was well liked in west London, but the Chelsea fans have taken to Conte with the sort of vigour usually reserved in England for home-grown talents like stalwart John Terry.

Conte has connected with the Chelsea fans through his passion. He celebrates each goal for his side as if he scored it himself and has regularly acted as a cheerleader, imploring supporters to increase the volume at pivotal moments.

With Terry departing, Chelsea have a new leader, who will try to inspire his side one more time in this triumphant season.

"We must find in ourselves the right motivation because the game will be very difficult," Conte says.

"I'm talking about the right fire, right motivation in our soul, in our heart. If we have this in the same proportion as Arsenal or more, we have the possibility to win or do the double."