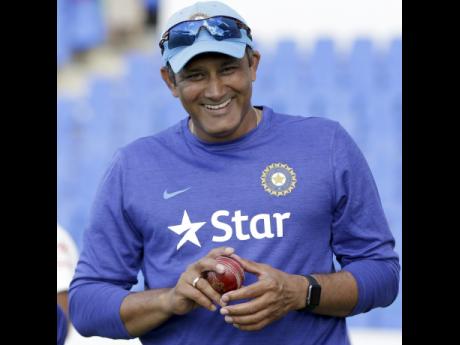 LONDON, CMC - West Indies and other international teams are likely to welcome the ICC Cricket Committee's recommendation that an "umpire's call" verdict on a leg before wicket (lbw) appeal under the Decision Review System (DRS) in Tests should no longer cost them.

The sport's world governing body announced yesterday that the committee, under the chairmanship of current India coach Anil Kumble, will recommend that teams will not lose a review when an lbw review comes back as "umpire's call".

"Should that be adopted, however, the 80-over top-up of reviews in Test cricket would be removed," said an ICC media release.

"The Committee will (also) recommend to the ICC Chief Executives' Committee that DRS should be able to be used in all Twenty20 International games.

"If the ICC Chief Executives' Committee approves these recommended changes, the new ICC playing conditions will come into effect from October 1 this year."

Under the DRS rule, only clearly incorrect decisions are reversed; if the video replay umpire's analysis is within established margins of error or is otherwise inconclusive, the on-field umpire's original call stands, hence the term "umpire's call" for lbw verdicts specifically.

Several other recommendations were made by the Committee that met in London on Tuesday and Wednesday, and includes ICC umpires manager Adrian Griffith, the former Barbados and West Indies opener.

The Committee expressed unanimous support for the implementation of the long-mooted Test championship, deeming that context was crucial to the future of the international game. It also reiterated its full support for the game being involved in the Olympic Games.

The Cricket Committee also considered the new Laws of Cricket (2017 Code) and has recommended the adoption of the majority of the changes to the Laws, most significantly giving umpires the power to send players off the field in response to the most serious incidents of player misconduct, such as violence on the field.