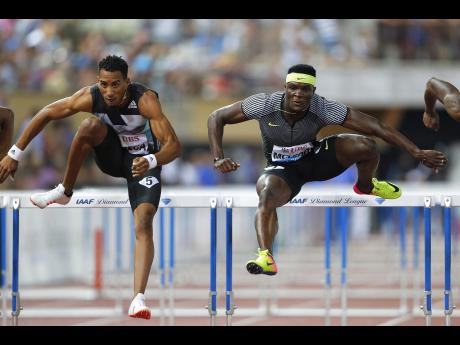 McLeod stopped the clock in a world leading 13.01 seconds to win ahead of University of Technology student Ronald Levy, who posted a lifetime best time of 13.10, improving his old mark of 13.33 seconds.

McLeod is now responsible for the three fastest times in the world this year in the event - 13.01, 13.04 and 13.09 with Levy now jumping to the number two spot on the IAAF Top List.

Elaine Thompson finished third in the 200m in 21.98 seconds with American Tori Bowie, 21.77 running away with the win. Shaunae Miller-Uibo, 21.91 finished second.

Bowie and Miller-Uibo were posting personal best times, while this was Thompson's fastest 200m this year.

In the women's 400m hurdles, Olympic finalist Janieve Russell finished eight in a time of 56.21 seconds with the event going to Ashley Spencer in 53.38 seconds.