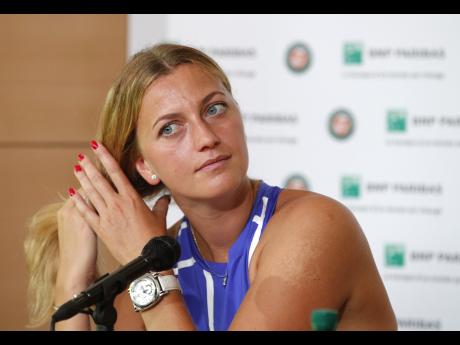 Kvitova to play at French Open

Only two months after picking up her racket for the first time following a knife attack at her home, Petra Kvitova will be playing at the French Open.

The two-time Wimbledon champion said yesterday she will make her comeback at Roland Garros, although she still lacks power and strength.

Kvitova has missed all season while recovering from surgery on her racket-holding left hand. She sustained damage to the tendons in her left hand, along with injuries to all five fingers and two nerves, during the attack.

Doctors initially thought she would need more time before returning to tennis. But Kvitova's recovery was faster than expected and she said last month that she was signing up for the French Open, which begins on Sunday, in hopes of being able to compete.

England advanced to the knockout stage of the Under-20 World Cup by beating hosts South Korea 1-0 yesterday.

Everton midfielder Kieran Dowell scored the only goal in the 56th minute, back-heeling a pass to Jonjoe Kelly and then positioning himself for the return pass and a shot into the far corner.

England won Group A with seven points, one more than South Korea. Argentina ended up in third place after beating Guinea 5-0 for its first win of the tournament. The Argentines still have a chance to advance.

The top two teams from each of the six groups and the four best third-place finishers advance to the next round. The final is set for June 11 in Suwon.

King James has another throne.

LeBron James surpassed Michael Jordan for the top spot on the NBA's all-time playoff scoring list, scoring 35 points against Boston on Thursday night to reach 5,995 in his career.

James played in his 212th career postseason game on Thursday night, when the Cavaliers beat the Celtics 135-102 in Game 5 of the Eastern Conference finals to advance to the NBA Finals.

The Cavaliers star came into the game needing 28 points for the record and hit a 3-pointer in the third quarter against the Celtics to break it.

Celtics star Isaiah Thomas says it's too early to tell if he needs surgery on his right hip.

The injury knocked the Boston point guard out of the Eastern Conference finals in Game 2. Although the Celtics won the next game without him, Cleveland went on to win the series in five games.

Thomas said at the team's practice facility yesterday that the swelling must go down before there is a decision on how to rehab. He says surgery is "not the No. 1 option right now",

Thomas says he told doctors that whatever happens, he needs to come back even better - "and I will".