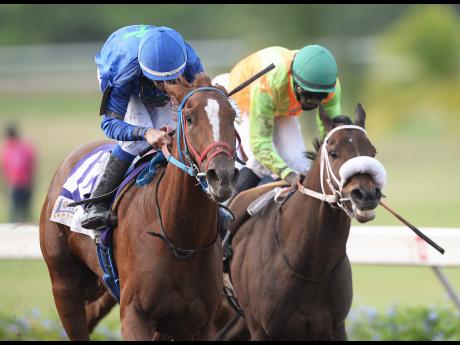 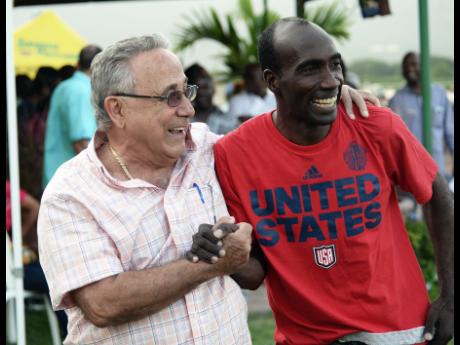 Trainer Ian Parsard's thrill of victory was yesterday soured by the agony of HENRY THE SECOND's disqualification in the $3m Lotto Classic Governor's Cup.

Amateurish whipping by Panamanian jockey Dick Cardenas, a two-time champion at Caymanas Park, caused HENRY THE SECOND to twice dart to his left, hindering MARKET FORCE, with Shane Ellis aboard, inside the final furlong of the 2000-metre race.

HENRY THE SECOND's number was taken down after a long enquiry and jockey's objection by Ellis, who quickly dismounted from aboard second-past-the post MARKET FORCE in the tunnel and rushed off to the stewards' room to lodge his complaint.

Cardenas, flown in from the United States by HENRY THE SECOND's connections, displacing Wesley 'Calaloo' Henry, weighed in at the winners' enclosure and declared his innocence, while Parsard anxiously awaited the stewards' deliberations.

"My horse was playing in the race, running in and out. He is still a little green. Apart from the little dip at the end, I didn't cross him that close, "Cardenas told The Sunday Gleaner.

However, the stewards saw differently and duly reversed the unofficial placings on the tote board, awarding the race to MARKET FORCE, the joint 9-5 favourite.

HENRY THE SECOND, who was sent off at odds of 2-1 due to his runaway win in his previous race, terrific form at exercise and featherweight 50.0 kilos, was placed second ahead of FEARLESS SAMURAI, the leader from a half-mile out, but could not stave off his lighter rivals under the burdensome topweight of 57.0 kilos in the stretch run.

Ellis could not contain his joy after the disqualification and ran into the winners' enclosure to greet trainer Richard Azan and MARKET FORCE's owners.

Azan, who was winning the race for the fifth time in 22 years, the last being KRONUS in 2015, said the finish, a length-and-a-quarter between HENRY THE SECOND and MARKET FORCE, could have gone either way without the interference.

"It would have been close. Shane said the horse, which is bigger than his, gave his horse a big hit," he said after accepting the winner's trophy.

Looking to the June 24 Jamaica Derby, in which the runners will carry level weight of 126lb, bar fillies' five-pound sex allowance, Azan said the 12-furlong race will be an "interesting" showdown.

"I am not taking anything away from the horse that was disqualified. He was running for the fifth time and FEARLESS SAMURAI, who was two-and-three-quarter lengths away, had topweight," he said of the race, which was run in 2:09.3.

The 1100-metre Lotto Sprint co-feature for Grade One sprinters was won by 10-1 outsider lightweight TALENTED TONY K, partnered by Cardenas, making every yard of the running with 50.0 kilos to beat CAMPESINO, who carried 57.0 with Robert Halledeen aboard by a length and a quarter in a fast 1:05.1.