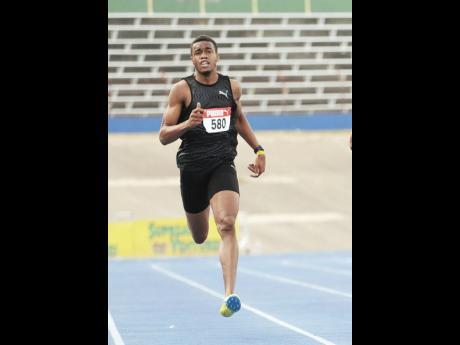 LAST Saturday saw the completion of both the NCAA Division 1 East and West preliminary round track and field championships in the United States. The top 12 athletes to finish in their respective events booked their tickets for the National Outdoor Championships to be held in Eugene, Oregon, between June 7 and 10.

A host of Jamaican athletes were involved in both Championships, where 28 advanced in their individual events. Sixteen came from the east, and 12 from the west, with former Kingston College quarter-miler Akeem Bloomfield leading the way from the east and former Hydel High thrower Shardia Lawrence the top performer from the West.

Following her recent National record in the Women's Discus throw, Lawrence continued her excellent form at the West Meet on the campus of the University of Texas, Austin, after a big throw of 60.58m, to be the number one seed moving on to Nationals. Former St Jago High athlete, Samantha Hall, competing for the University of Texas El Paso, also moved forward after finishing seventh overall with 56.50m.

Former Wolmer's Boys sprinter Odean Skeen won his heat in the Men's 100m for Auburn in 10.24 seconds to be the fourth fastest qualifier in the event. Also advancing with him was his teammate Raheem Chambers, formerly of St Jago High, who was eighth overall after finishing fourth in his heat in 10.37 seconds.

Former Convent of Mercy Academy (Alpha) athlete Sashel Brown continued her good form this season for Auburn in the Women's 400m hurdles after finishing second in her heat and third overall in a personal best of 56.20 seconds.

Other qualifiers on the track were former Wolmer's Girls athlete Joneil Smith and St Jago High's Natalliah Whyte, who both competed for Auburn, along with Peta-Gaye Williams and Jeanine Williams. Smith finished sixth overall in the Women's 100m in 11.40 seconds, while it was seventh overall for Whyte in the 200ms in 22.88 seconds.