Totti subbed in for emotional farewell 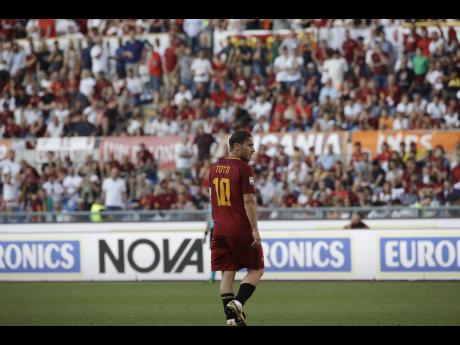 AP
Roma’s Francesco Totti walks the pitch during an Italian Serie A match between Roma and Genoa at the Olympic stadium in Rome yesterday. Francesco Totti is playing his final match with Roma against Genoa after a 25-season career with his home town club.

Francesco Totti has come on as a second-half substitute in his last match in a Roma shirt, concluding a 25-season career with his home town club.

Almost 60,000 fans inside the Stadio Olimpico stood up and cheered when Totti replaced Mohamed Salah in the 54th minute of yesterday's match against Genoa.

Before kickoff, Totti went and saluted Roma's hard-core 'ultra' fans in the 'curva sud' southern end of the stadium.

After posing for pictures, the 40-year-old Totti took his spot on the bench as many fans cried.

Roma coach Luciano Spalletti received a long series of boos and whistles linked to how he has used Totti sparingly this season when he was introduced before the match.

While Totti has declared this is his final match with Roma, he has not said he will retire from football, sparking speculation he could end his career with another squad.

Thousands of fans wore Totti's number 10 shirt in white or red while others had T-shirts that read simply, 'Captain forever'.

Roma wore special shirts featuring a dedication to Totti, and so did Genoa

On the back of Genoa's shirts, a message read, '25 seasons with only one shirt, 785 appearances, 307 goals, world champion in 2006. Francesco Totti is part of football history.'

Roma won the game 3-2 through goals from Edin Dzeko in the 10th minute, Daniele De Rossi in the 74th and Diego Perotti in the 90th. Genoa's scorers were Pietro Pellegri in the 3rd and Darko Lazovic in the 79th minute.