Playing through pain - Mladenovic through to French Open second round 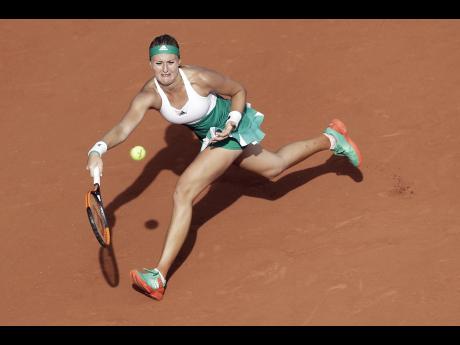 AP
France's Kristina Mladenovic returns the ball to USA's Jennifer Brady in the first round of the French Open tennis tournament at the Roland Garros stadium in Paris yesterday.

PARIS,France (AP):
Kristina Mladenovic played through pain to hold off Jennifer Brady of the United States and reach the second round of the French Open yesterday.

Mladenovic, seeded 13th, struggled to hold back tears after prevailing 3-6, 6-3, 9-7 in just under three hours, all the while encouraged passionately by her home crowd on Court Philippe Chartrier.

She was not even sure if she would be able to start the match because of a back problem, and had to go off the court for treatment when she was 3-0 down in the opening set.

“Back feels so-so,” she said. “Unlucky thing happened to me yesterday (Sunday). I did a wrong movement and I blocked my back.

“This morning (Monday) was way better, but it was really bad still for being, like, at the top level of playing. I took some medications when I went out at 3-0, and the doctor said to give it a try and see. ... You know, I just dig in there. I really don’t know how I managed that.”

Mladenovic is confident of fully recovering before her next match against Italian qualifier Sara Errani, who reached the final in 2012.

“Just extremely happy to give myself a chance to be still in the tournament, and I’m sure I will come back better,” she said.

Brady also led 3-0 in the third set before Mladenovic won the next four games, with the crowd loudly cheering every point.

“I saw myself going out,” Mladenovic said. “Honestly, from the first set, I knew it would be difficult. Then, when I was leading in the second; that gave me a bit of confidence.

“At 3-0 [in the third], honestly I really panicked. Then ball by ball, I came back. I just kept telling myself it was just a break. Then it ended up being a marathon.”

It was the 88th-ranked Brady’s first experience in the main draw at the French Open and only her second Grand Slam. She reached the last 16 at the Australian Open.

“It stings a bit,” Brady said.

“Playing on stadium court at a Grand Slam against the home player, it was a great atmosphere out there. I had a lot of fun.”