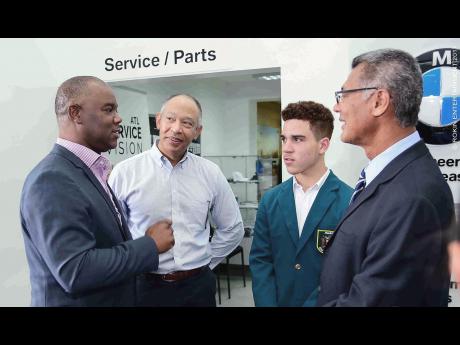 With PGA Tour LatinoamÈrica sanctioning its first official event in Jamaica, organisers of the BMW Jamaica Classic, which runs from June 12-18 at the Cinnamon Hill Golf Course in Montego Bay, are promising an exciting few days of competition at the historic tournament.

More than $22 million in prizes will be up for grabs at the tournament, which will tee off on one of the island's most celebrated golf courses.

Oliver McIntosh, CEO and president of regional subscriber cable network SportsMax the organisers of the event, is thrilled that the high-level competition will further develop and showcase the island's golfing product and talent.

"SportsMax has always contributed significantly to the development of golf in Jamaica, first through our annual Team Match Play Golf Tournament and now it is our distinct pleasure to have the PGA Tour LatinoamÈrica on Jamaica's shores as we continue to expose the immense golfing talent in Jamaica and the Caribbean," said McIntosh during yesterday's media launch at ATL Autobahn in St Andrew, where he highlighted the US$175,000 worth of prize money. The winner of the tournament will pocket US$40,000 (J$5.2 million).

Minister of Tourism Edmund Bartlett hailed the event as a contributor to the island's sports tourism offerings.

"This is a wonderful moment for sports tourism in Jamaica. The last time we had a feeling like this was in 2009. This one brings us to another dimension. We want to commend SportsMax, BMW Jamaica and the Jamaica Tourist Board," Bartlett said.

"Jamaica does have the potential to become a gold destination if we can market our four golf courses. We want to build on the infrastructure in order to achieve that goal," he pointed out.

President of the PGA Tour LatinoamÈrica, Jack Warfield, who was absent at the launch, sent his message, which read: "The addition of the Jamaica Classic not only allows us to expand PGA Tour LatinoamÈrica's footprint in the region but also allow us to reconnect with a long-time partner in Jamaica's tourism.

"Event managers and broadcasters SportsMax and main sponsors, the Jamaica Tourist Board and BMW, have done a fantastic job in order to bring our Tour to one of the top destinations in the Caribbean, and we're sure the players will enjoy their visit to Jamaica."

"A tournament of this magnitude and stature is very exciting for the nation. We have to capitalise on the tourism dollar. The Cinnamon Hill course is going to be a fantastic test for golfers," Chin said.

A total of 140 golfers from more than 20 countries have already registered and another 60 will qualify on the first day to make 200 competitors.