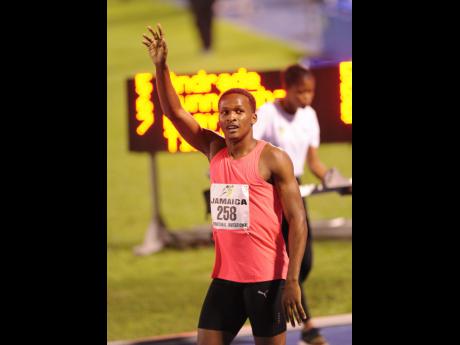 Ricardo Makyn
Jaheel Hyde waves to the crowd after his second-place finish in the men’s 400m hurdles event at the Jamaica International Invitational meet held at the National Stadium on May 20.

Having signed with Ricky Simms and his Pace Sports Management agency, ever-improving Jamaican hurdler Jaheel Hyde - shiny new PB in hand, is approaching the season with renewed confidence and drive.

He noted that it's the result of a new approach; not only to his life as a professional athlete, but also to his training and preparation under his high school coach Christopher Harley, who has returned to take full control of the charge's programme.

More speed work, more hurdling, more focus plus the support of Simms as his agent and Nugent Walker as his manager - which is of course the same tandem that guides the career and affairs of Usain Bolt, forms the backbone of the athlete's recent success and one that he hopes will continue to reap dividends.

"This year I have made a lot of changes to my training and to everything pertaining to my track and field and my hurdling this year - I am doing a lot more hurdling in training. Last year I didn't do that much hurdling but this year I am doing a lot of hurdling drills before my workouts whether or not I have hurdles on that day," Hyde told The Gleaner.

The hurdler has already done two 200m races this season, four years after his last half-lap effort, during his days as a student at Wolmer's Boys School.

"My coach said that he wanted to put more speed in my training and that is the plan so it's more speed-based for me this year. I ran two pretty good times and what he is doing is paying off," assessed Hyde, who admitted that his 48.52 seconds came as a surprise to him.

"It was a good race, I was happy to be in that race first of all but I made some mistakes. I took my attention off the rest of the field and was kind of focusing in one person at one point and realised that the rest of the field was getting away from me and I think that played a part in me losing that race. It would be great for me to open with 47 seconds but I am happy with the progress and the steps that I am taking."

As it relates to his steps where his management structure is concerned, Hyde said: "I had to sit down and evaluate my progress and what's best for me. I spoke to a lot of people and got a lot of advice and I thought that going forward, I needed to make that change."

He admitted that Bolt played some part in his decision.

"Usain Bolt is my mentor, I'm not saying he sent me to anyone, I went to him and sought his advice but I went out of my way to make the necessary contacts after my research and conviction," Hyde said.

Hyde was previously managed by Garfield Coke and was coached by Bert Cameron, who worked along with Harley.