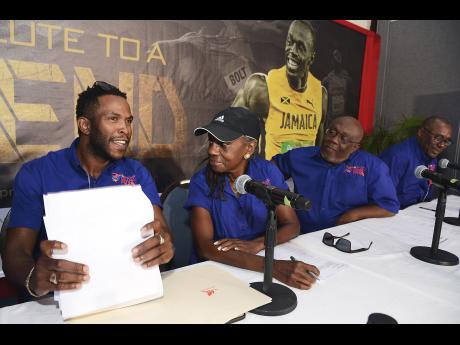 Ricardo Makyn
Nugent Walker (left), executive manager for Usain Bolt and member of the organising team, has the attention of general secretary Cynthia Cooke (centre) and Glen Mills, president and head coach at Racers Track Club, during a media briefing for the JN Racers Grand Prix held at The Jamaica Pegasus yesterday.

President and head coach of the Racers Track Club, Glen Mills, does not believe that the club will lose its prestige or standard of excellence when its posterboy, Usain Bolt, retires this year.

Mills, who also conditions the likes of Yohan Blake and Kemar Bailey-Cole at the University of West Indies-based club, underlined also, that he intends to continue coaching for as long as he can.

Speaking at yesterday's JN Racers Grand Prix press conference at The Jamaica Pegasus hotel, Mills acknowledged that both his and the club's legacies are tied to Bolt's career, but declared plans to transform the outfit into a world- class athletic institution with a proposed new stadium, to be named in his and Bolt's honour being a crucial part to those developments.

"We are planning to build an institution so that the legacy will continue to grow. Track and field and Jamaica can be the beneficiaries, so I hope that (Mills-Bolt stadium) project comes off so we can put in an up-to-date training centre, and so on," he said.

"We are trying to develop an institution. We have coaches understudying and if we get going on the bigger (stadium) project, we can unveil more to the public," he continued.

"My participation in the sport started before Bolt, and if the good Lord gives me health and strength, it will not end with Bolt. I have other athletes that need my attention. Bolt has had a fantastic career but I have built my own identity, it is not the only thing that has defined my career, so I will continue until my time comes," Mills stated.

Meanwhile, the demand for grandstand tickets, locally and internationally, has been overwhelming, so much so that General Secretary Cynthia Cooke who outlined how remaining tickets will be distributed, pleaded to patrons to buy bleachers.

"The demands for tickets are very high. We are having pressure for grandstand, so I encourage patrons to purchase bleachers tickets," she said.

Bleachers tickets are still being sold online and will continue until the day of the meet. Grandstand tickets are limited and those remaining after the online sale will be sold at The Jamaica Pegasus starting on Monday, June 5, from 10.a.m. to 4.30 p.m., each day.

Tickets will also be on sale at select JN Bank outlets.

Finish line tickets will cost $6,000, grandstand $3,500 and bleachers $1000. Grandstand tickets will be limited to five per person.