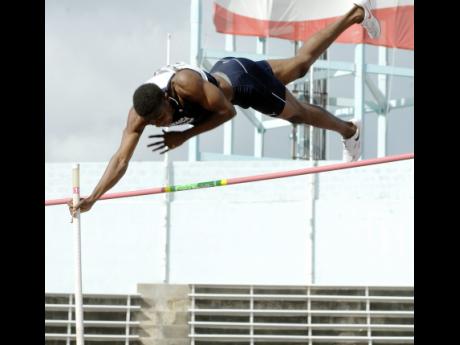 Ian Allen
K'Don Samuels of Jamaica College (JC) clears the bar at 4.45 metres in the boys' pole vault in 2009, at the Inter-Secondary Schools Sports Association (ISSA)/GraceKennedy Boys and Girls' Athletic Championships, at the National Stadium.

Will a Jamaican ever pole vault like Sam Kendricks? Do we care enough about non-sprint events to develop disciplines other than those in which we have history? How long would it take?

Kendricks, the Olympic bronze medal winner, soared over 5.60m, 5.70m and 5.80m with large pockets of fans at the recent Jamaica Invitational spellbound by his every move. His runway speed, his plant and in-flight technique were simply cheese to chalk to what we see at Boys and Girls' Championships.

Few schools have access to poles, runaways and the related equipment. Even where there is known expertise as in the person of Orville Brown, the JC head coach, former KC expert Michael Russell, and Calabar assistant Omar Hawes, the limitations are hard to avoid. The vault doesn't even appear at important high-school meets like Western Championships and Central Championships.

As things stand, even Champs-winning vaulters find it difficult to get scholarships at home or abroad. The event isn't even on the agenda at the Jamaica Inter-Collegiate Championships. It's sad.

The result is that the Jamaican pole vault record is 5.35m - 35 centimetres below the qualifying standard for the World Championships.

One solution for developing the vault, and other events in which we lag behind, is the establishment of parish centres. Such locations, perhaps at teachers' colleges, would house equipment and employ trained coaches. Weekend and holiday seminars in each parish would expose far more to the event, ensuring that participants learn the safe fundamentals of the event in which Kendricks excels.

When Jamaica College opened its revolutionary five runway facility in 2011, there was hope that the nation would see an acceleration in all the jumps. The surge is happening, but the vault has lagged behind.

Presumably, new synthetic runways at Calabar and Kingston College will have a limited effect on the vault, too. The best guess is that a far larger pool of trained vaulters is needed for national progress.

Sponsors would love it. The event is so spectacular that fans can't help to watch. That's guaranteed exposure.

How long would it take? That depends. A wholehearted effort could bear fruit in a far shorter time than one that drips in resources in a piecemeal manner. A few years ago, Cuba had no vaulters. Now, the Cubans have the reigning women's world champion, Yarisley Silva and the 2011 men's third-placer Lazaro Borges.

The low levels seen at Boys and Girls' Championships indicate that, left alone, the school system is unlikely to produce a Jamaican Bubka, Silva or Kendricks. Clearly, an intervention is needed. If we really want Jamaicans to vault like Sam, we have to act.

- Hubert Lawrence has made notes at track side since 1980