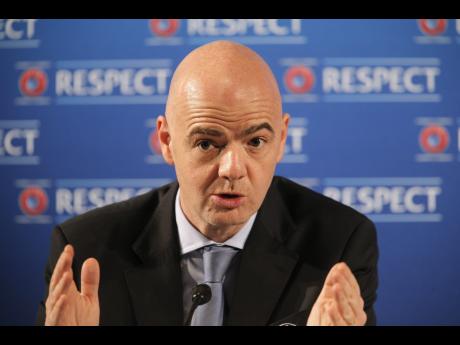 FIFA signed another Chinese sponsor for the World Cup yesterday, agreeing to a deal with smartphone and software maker Vivo.

The announcement further links FIFA with China, which is likely to mount a bid for the 2030 World Cup despite current rules effectively blocking another Asian bid before the 2034 edition.

The six-year Vivo contract for a second-tier sponsorship runs through the 2022 World Cup in Qatar, FIFA said. The value of the deal was not disclosed.

Wanda, a property and cinema conglomerate, signed as a top-tier sponsor through 2030. Consumer electronics firm Hisense committed only through the 2018 World Cup in Russia.

Six Russian and Ukrainian track athletes were handed doping bans yesterday after retests found they had doped at the 2008 and 2012 Olympics.

They had already been stripped of their Olympic medals last year by the International Olympic Committee.

There were also two-year bans for Ukrainian athletes Vita Palamar, Marharyta Tverdohlib and Maksym Mazuryk, who competed at the Olympics but were not medallists.

The IAAF also announced an eight-year sanction for Natalia Lupu, who was the 800-meter European indoor champion in 2013.

Daniele De Rossi has extended his contract with Roma for two more seasons in a move that should enable him to take over the captain's armband from the recently retired Francesco Totti.

De Rossi made the announcement on Roma's TV channel yesterday, exactly a month before his contract was to expire.

He says "it's been done for a few days but I asked that it not be mentioned Sunday because that was a day dedicated to another player and I preferred to make it official later."

Totti played his final match with Roma on Sunday.

Like Totti, the 33-year-old De Rossi is from Rome and has played his entire career with his hometown club.

A versatile midfielder, De Rossi has made 561 appearances for Roma and scored 59 goals.