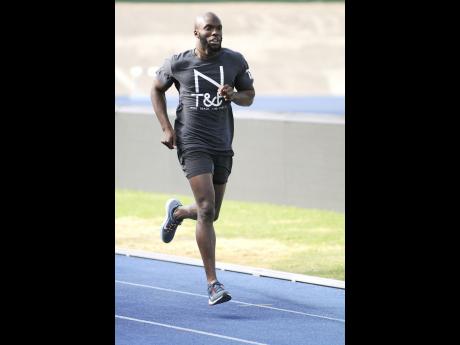 Though he is at a stage where other stars are contemplating retirement, American 400m ace LaShawn Merritt is harbouring no such thoughts and believes he will be a bigger threat in the 200m compared to last year. Merritt is still working hard and is still motivated by the challenges presented by the sport, particularly those centred around his interest in the 200m.

Speaking in Jamaica two weeks ago, the 30-year-old American described the 200m as a new event for him, adding that he was not particularly prepared to contest it at a major championships.

"I kinda found a new event that I run a little more often now," he said of the 200m in which he was the fastest man in the world for 2016. Merritt posted a personal best of 19.74 seconds last year and reached the Olympic final after placing third in the 400m.

"Last year I ran fast, but it wasn't really set up in training for me to really compete at a championship level in that event, just mentally wise," Merritt related.

"I don't think I was as prepared for that, but this year I'll be more prepared."

He expects to do more over-distance work to ensure he can handle the multiple rounds of the 400m, for which he has earned an automatic entry into the World Championships, and the 200m.

Merritt topped the Diamond League in the 400m last year with wins in Doha, Rabat, Lausanne and Zurich.

The American was quick to underline that he has no plans to hang up his spikes, noting that he still enjoys competing.

"Not yet," Merritt said emphatically. "I'm still enjoying it. I'm still dedicated, motivation is still through the roof and I'm feeling healthy.

"I can't go out every meet and try to blast every meet, because the recovery at this age takes a little longer," added the 2008 Olympic 400m gold medal winner. "So (it's) just (about) understanding my body through the years, (and) being proactive about a lot of things, but I don't plan on retiring anytime soon."

Outlining his rationale further, he enumerated, "I ran a lot of personal records last year, so it kept me motivated for this year and a lot of years to come."

Merritt ran a personal best of 31.23 seconds over 300m in Kingston at the first staging of the JN Racers Grand Prix last year.

The most noticeable recent retirement at age 30 came from Formula 1 racing world champion Nico Rosberg. The German retired five days after clinching his first world title. Another is coming later this year as six-time individual Olympic champion Usain Bolt has already announced that this season will be his last.