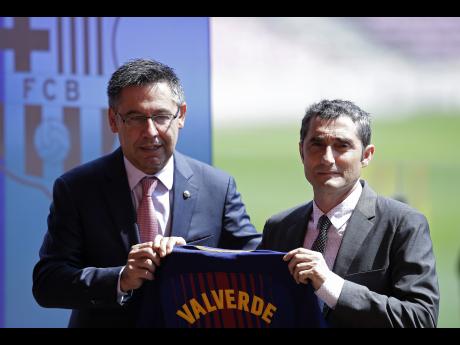 Ernesto Valverde wants to start his tenure as Barcelona coach in the best way possible, by beating Real Madrid.

Shortly after becoming Barcelona's 57th coach yesterday, Valverde said his first goal was to get ready for a trio of "cl·sico" matches coming over the next few months.

"It makes the challenge we have ahead of us even bigger," Valverde said about Barcelona's friendly against Madrid in Miami on July 29 before the curtain-raising Spanish Super Cup in August.

"I just arrived, and I still have to think about everything, but it is important that the players find their form in the warm-up matches before the Super Cup," Valverde said at his first news conference near Camp Nou. "We have a summer tour with games against tough teams, and the idea is to get ready for the Super Cup."

The 53-year-old Valverde will be charged with reinvigorating a side that boasts one of the world's most talented attacks in Lionel Messi, Neymar, and Luis Su·rez, but finished last season behind Madrid in the Spanish League and the Champions League. Barcelona lost in the quarter-finals of Europe's top-tier competition to Juventus, which Madrid will take on in tomorrow's final.

Barcelona announced on Monday that Valverde had agreed to a two-year contract, with an option for a third season.

Valverde seems the perfect fit for Barcelona, given his knowledge of the club as a former player under coach Johan Cruyff in the 1980s and his experience as a well-travelled manager.

He arrives after four noteworthy seasons at Athletic Bilbao. Having also coached successfully at Valencia, Villarreal, Espanyol and Greek club Olympiakos, Valverde has long been considered one of Spain's sharpest football minds.

His serious, even-keeled demeanour should help him handle the high-pressure atmosphere surrounding Barcelona that left Luis Enrique in need of a long break.

"I know that the bar has been set very high," Valverde said. "Barcelona has had great coaches. I think about Luis Enrique, (Pep) Guardiola, Tito Vilanova, Cruyff. I know the demands of this club and the challenge I face."

While Valverde said that he would "adapt" to Barcelona's ball-possession style forged under Cruyff and perfected by Guardiola, his Bilbao sides displayed the intensity in pressuring up the field that Barcelona lacked last season.

Valverde has also proven to get the most out of his players, something that bodes well for a Barcelona youth programme, which has lost its weight on the first team. He said that he plans to "have a fluid relationship" with the reserve team.