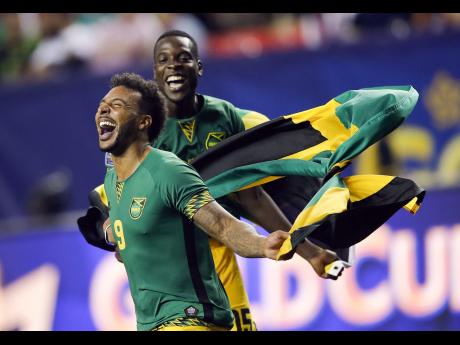 Reggae Boy Giles Barnes struck for the first time in an Orlando City shirt as he came off the bench to help the hosts beat DC United 2-0 and snap a worrying six-game win-less streak in the MLS here Wednesday night.

The 28-year-old, who arrived in February from the Vancouver Whitecaps, also had a hand in the first goal scored by Canadian Cyle Larin before getting on the scoresheet late in the encounter, albeit fortuitously.

Playing before 24,000 fans on a wet night at Orlando City Stadium, neither team could break the other down over the first 45 minutes leading to a goal-less stalemate at the half-time whistle.

However, the game came to life in the second half especially with Barnes introduced as a 59th-minute sub for Luis Gil.

In the 66th minute, the enterprising Barnes did well to earn a free kick from just outside the box on the left side and Will Johnson floated his delivery in at the far post where Larin eluded his marker to nod home from close range.

Lamar Neagle's 75-minute effort was then cleared off the line by Johnathan Spector as the visitors came close to equalising but with two minutes left, Barnes struck to give Orlando the insurance they needed.

Goal-bound, he collected a ball from Tony Rocha and unleashed a powerful volley from about 25 yards out which burst through the hands of goalkeeper Bill Hamid and into the back of the nets.

"I thought the team was playing hard but just needed a little pick-me-up," Barnes said afterwards.

"I should have probably slid Tony Rocha the ball on the first one, but the second time it went in. The harder you work, the luckier you get and I got lucky."

The England-born Barnes, who has played 19 times for Jamaica, has experienced a busy last few seasons. He ended a four-year stint with Houston Dynamo last year and spent one season at Vancouver before moving to Orlando.

Barnes was a key part of the Jamaica squad which was good enough to reach the final of the 2015 CONCACAF Gold Cup before losing to Mexico.