Chase gets ODI nod against Afghans 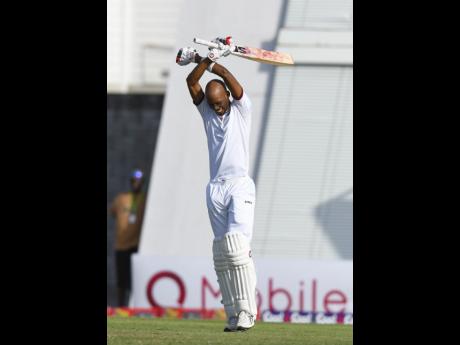 Roston Chase's enterprise in the Test arena has earned him a call-up to the West Indies one-day side for the three-match series against minnows Afghanistan starting later next week.

The 25-year-old right-hander is the only newcomer in a 13-man squad announced yesterday, which will be again captained by all-rounder Jason Holder and includes no surprises.

Chase has come to the fore in recent times as the Caribbean side's most dependable batsman in the Test format, despite his limited experience of having played only 10 Tests.

He struck back-to-back hundreds in the recent Test series against Pakistan en route to becoming the only batsman to top 400 runs and currently averages 48.

Chase gathered only 214 runs at an average of 26 for Barbados Pride during this year's Regional Super50 and averages only 25 in his List A career, but chief selector Courtney Browne said the player's heavy scoring in Tests, coupled with his useful off-spin, would be an asset to the side.

"Roston Chase is the one new player in the squad. He was considered before for ODI selection primarily because of his all-round ability," Browne explained.

"With his prolific run-scoring in the last Test series and his continued steady all-round performances in the PCL, we now feel it's time to introduce him to ODI cricket. He was not among the leading run scorers in the Super50 tournament earlier this year, but we believe with his skill set and the way he has been playing he could be an asset.

"His outstanding efforts with the bat could not be ignored any longer. Coupled with his useful bowling, (it) can only add value to our squad."

Selectors have persisted with the ineffective Bishoo despite the Guyanese's single wicket in 26 overs in the three-match series against Pakistan in April.

New-ball bowlers Shannon Gabriel and Alzarri Joseph have been retained and headline an attack that also includes seamers Holder and Miguel Cummins.

"With Roston now adding an additional spinning option for the captain, this offers further variety to the bowling attack. This gives the team the option of playing an additional fast bowler if required."

Chadwick Walton, who managed just 36 runs from three innings against Pakistan, has been dropped from the side while his countryman, Rovman Powell, is the lone Jamaican to earn a call-up.