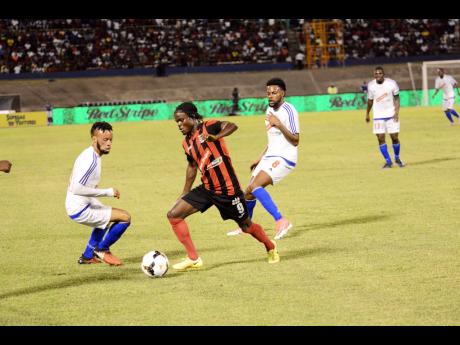 Arnett Gardens came from behind to beat Portmore United 2-1 in the Red Stripe Premier League final at the National Stadium on Monday to secure their fifth top flight title and second in three years with Marvin Morgan hogging the headlines with a searing second half drive.

Morgan's goal was definitely one for the cameras and one that left Arnett Gardens coach Jerome Waite searching for superlatives at the end of the game.

"That Marvin Morgan goal was ... unbelievable," said Waite after the final whistle. Morgan himself noted that he wanted to ensure a special night for the fans that packed inside the venue: "I told myself that I didn't want to disappoint the people. I was calm and knew I would deliver."

That goal might have highlighted the fixture, but the newly - crowned champions were made to sweat.

It was the second straight loss in a final for Portmore United, who were overpowered in the second half after a positive start.

"We started out well in the first half, we got that goal and we were pressuring them. We started flat in the second half and lost concentration. We weren't as solid defensively but I won't kill them, they tried and to know what we are coming from and to be in the final says a lot about the team," offered Portmore coach Linval Dixon. Things started well for Dixon and his team as Portmore certainly didn’t waste any time getting on the board with Maalique Foster putting an emphatic end to a good move in the second minute, which started with a perfectly weighted pass out of midfield from Michael Binns.

Foster collected the pass in stride just outside the penalty box, lifted the ball over his marker’s head with his second touch before bundling the ball into the back of the net under pressure from the Arnett Gardens defence.

For Waite, it was never something to worry about.

Still, it was a promising start to a half that didn’t quite live up to expectations.

In truth, the teams for the most part looked like the fourth and sixth best placed teams that they in fact were in the league standings prior to the knockout phase of the competition

Poor passing, wild, aimless play spoiled the party, even if Portmore United looked a bit sharper for periods, with crisper passing particularly between the midfielders.

They were almost rewarded midway the half when a link-up between Foster, Jeremie Lynch and Damion Binns, led to the latter seeing his shot from the top of the box blocked by a wall of Arnett Gardens defenders following some silky play by Lynch down the right side of the Arnett Gardens penalty area.

That seemed to have sent a shockwave through the Arnett Gardens team and on 33 minutes, they thought they found a way back into the game when Roberto Johnson hacked down Marvin Morgan in the box.

Fabian Reid’s penalty was, however, saved by goalkeeper Shaven-Sean Paul, who went low to his right to avert the danger. Lennox Russell somehow sent the ball over the bar from three yards out a few seconds later as the Junglists pushed for an equaliser.

The second half was another matter all together with both teams attacking with passion and playing with assurance for the most part.

However, it was Arnett Gardens who enjoyed the better play and finally achieved parity in the 55th minute when Ranike Anderson, took the ball on his thigh before spinning in traffic and shooting on the volley to send the vast majority of the almost 20,000 persons in attendance in a red and black frenzy.

Anderson’s goal came after a deep freekick from the left side was played back into the danger area after initially being headed clear by the Portmore defence.

The winner could not have been any sweeter.

Marvin Morgan produced a special strike 10 minutes later, pouncing on a loose ball, which came from his own throw-in, connecting his right foot fiercely with the ball from the left corner of the penalty box to rattle the net behind a hopeless Paul in the Arnett Gardens goal.

It was a goal that deserved to win any match at any level, in this case, it was the Red Stripe Premier League title that will return to the 'Junglists' trophy cabinet, making them the joint most successful team in Jamaican top flight football along with Tivoli Gardens, Portmore United and Santos.