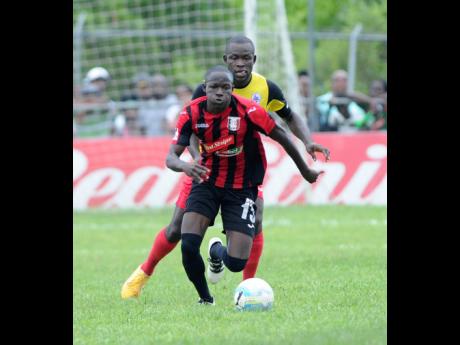 Fabian Reid is perhaps the most talked about player in the Red Stripe Premier League at this time, but it could have been different.

Like his countrymen namesake, Adrian Reid and Damian Williams, the 25-year-old could have been a part of Trinidad and Tobago's San Juan Jabloteh team, which recently contested the final of the Caribbean Football Union Club Championship.

"I was in Trinidad and playing well, but I was not being seen by the national coaches, so I decided to come back home to do well, show myself and get a national call-up," the former Clarendon College player said.

Reid, who spent two seasons in the twin-island republic, in which he scored five goals from midfield in his first season and 11 in the second, where he featured as a forward, returned to Arnett Gardens at the start of the 2016-17 season.

"I am playing well now and things are going good so far and I have been invited to train with the national team ahead of the Caribbean Cup," the excited Reid said.

Reid, or 'Blacks' as he is fondly referred to because of his almost jet black complexion, has produced the goals in the play-offs to propel Arnett Gardens to their second final in three years. He has scored five goals in four games to help his team see off defending champions Montego Bay United and number one-ranked Humble Lion FC.

All of that could have been different had others taken their opportunities.

"The coach knows that I can play at least six different positions, so he used me all over. I have played at wing back, all the midfield positions and wing, but had not played as a centre forward before the play-offs.

"The coach has tried me at dead centre forward and I am delivering now. I plan to continue as we are going all the way," Reid declared.