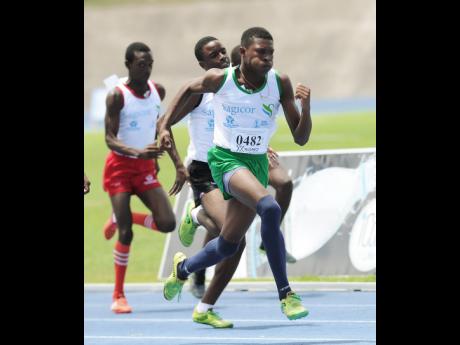 Ricardo Makyn
Antonio Phillips of St Andrew is a show of power on his way to winning the boys' Under-17 100m at the JTA-Sagicor National Athletics Championsips at the National Stadium on Saturday. 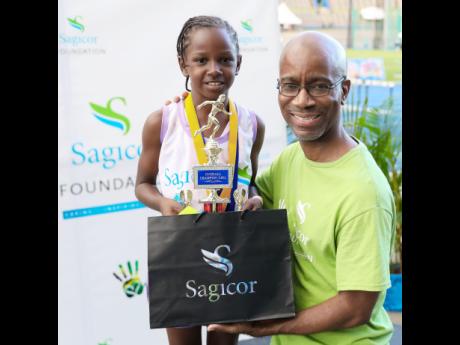 Contributed
Karee Tape, nine years old, from St Elizabeth, receives her prize from Willad Brown – executive vice-president, Sagicor Life Jamaica, after being named the Champion Girl of the JTA/Sagicor National Athletics Championship. Tape scored 25 points to come out on top of her peers. Over 1200 students from primary, junior high and all-age schools participated Saturday's championships held at the National Stadium.
1
2

Christopher Scott turned in an outstanding sprint performance to help St Catherine to its third hold on the Jamaica Teachers' Association-Sagicor Athletics Championships at the National Stadium on Saturday.

The Oral Andre Whilby-coached St Catherine tallied 304 points to win the championships ahead of dethroned champions St Andrew, who finished on 250 points.

"It's an overwhelming feeling, as it is winning any championship, because we came into the competition not knowing what to expect," said Whilby.

"We had a lot of challenges on the first day because a lot of our athletes didn't turn up for their events, but we pulled through, and so it is a satisfying feeling to be the champions this year," he added.

Scott, who attends Old Harbour Primary, was delighted with his performance.

"I feel good because I worked very hard for this," said Scott. "The races were not difficult because I was always confident that I was going to win both of them," he said.

Rasheda Samuels from St Thomas won the girls' long jump open with a leap of 5.00m ahead of Clarendon's Chelsea Eccleston, 4.98m, and Bianca Peterkin of St Andrew, 4.98m.