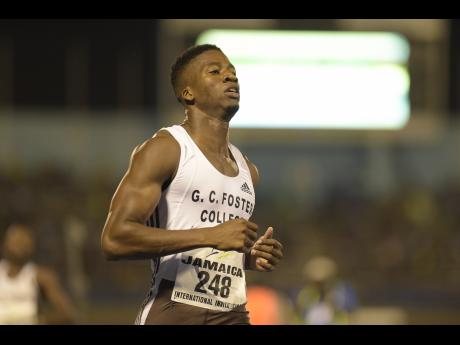 IT has been a very good season so far for Demish Gaye of the GC Foster College, who has been in great form over the 400m. He was the first Jamaican to go under 45 seconds this season, when he clocked a personal best of 44.85 seconds in early May at a JAAA All Comers Meet inside the National Stadium. Since then, however, he has been bettered by two other Jamaicans in Nathan Allen, with 44.52 seconds, and Akeem Bloomfield, who clocked 44.74.

Gaye showed, a few weeks ago, that he is now ready for top competition, as he looked quite relaxed in winning the one lap event at the Jamaica International Invitational Meet in 45.08 seconds where he defeated a decent field. Come this Saturday at the JN Racers Grand Prix, he will face his sternest test when he meets the likes of the Trinidad and Tobago duo of Lalonde Gordon and Machel Cedenio, along with the United States' Vernon Norwood and Mike Berry and Jamaica's own Fitzroy Dunkley and national 400m record holder Rusheen McDonald. Based on his progress so far this season, the very talented Gaye looks set to pass this test with flying colours.

His coach at the GC Foster College, Maurice Wilson, who is the Technical Director of the country's Senior Track and field programme, thinks he will do something special on Saturday. "Demish has improved tremendously in relation to his speed. He has so far run 20.48 seconds in 200m, almost 0.4 better than his previous personal best. This season he has run four major 400s and has shown improvement in various different parts of the race. The expectation based on his training is for him to do very well at the Racers Grand Prix Meet, then take that form in to the National Trials where the expectation is that he will take one of the individual spots to the World Championships," said a very upbeat Wilson.

Although he has not yet hit his best form yet this season, Cedenio, who was fourth in Rio last year with a best of 44.01 seconds, could hit top form on Saturday despite a season best of 45,65 seconds. Norwood shows at the Eugene Diamond League that he is getting near to his best after finishing third in 45.05 seconds and with a season best of 44.82 seconds, done in Baton Rouge earlier in the season, he could go all the way. Dunkley, however, showed good form at the Penn Relays when he anchored Jamaica to a rare win over the USA in the mile relay.