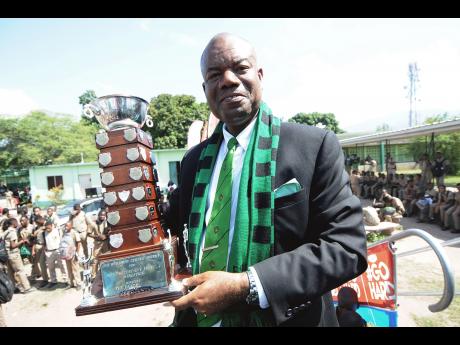 That Calabar High School has created for itself an overwhelmingly significant mark in the annals of Jamaica's track and field is not up for debate. There can be no credible argument to topple or even downsize that opinion. Such a status was attained on the heels of outstanding, world-level achievements by the institution's products, Sir Arthur Wint and Herb McKenley, both departed, as well as a former sprint world record holder, Dennis Johnson.

Recently, the school, backed by a conglomerate of avid supporters, including some nation leaders, acquired a synthetic running track. With it came infrastructure which saw them, at the time of commissioning, the only high school so blessed. This should go a far way to their maintaining a dynasty of Boys' Champs successes, which is already threatening to mirror that of their arch rivals, Kingston College in the period 1962-1975. It should be noted, too, that sensing this, the North Street school is well on the way to establishing its own.

Foster's Fairplay, which, for a long time, has agonised over the substandard surfaces on which our young athletes have been compelled to train, is celebrating these developments. Driving this good feeling is the thought that not only will the schoolboys benefit, but their elite-level coaches will seize the opportunity of establishing at the enhanced venue senior programmes built around athletes capable of performing with distinction, similar to the three giants mentioned earlier - a major plus for Jamaica.

However, there is that proverbial fly in the ointment. Ominous sounds are coming from the Calabar principal that are interpreted as being a locking down of the new track. The words used, in the view of this columnist, establish both intent and guilt. When the question of this action being taken in the middle of the season was raised, the head honcho, Albert Corcho, disagreed. In his view, it was "the end of the season", which would make the ruling, according to his judgment, a natural one.

It is useful to mention that from the same quarter, there was talk of damage being done to the track by the use of oversized spikes. Foster's Fairplay is not sure how that can be attributed to either party - the school's track team or the Akan Club - both coached by the highly celebrated Michael Clarke. As such, that argument as to the reason for the boss's seemingly unrelenting positions should be discounted. Another point, worthy of consideration is that Clarke has chosen silence as his response. To read disgust into that cannot be too far off the mark, and he could be seeking other options to prepare both sets of his athletes.

Corcho spoke of plans to reopen the track after repairs, at the same time suggesting that athletes from the school, having finished their duty to Calabar at the so-called "end of the season", as well as the club team, could go elsewhere to prepare themselves for their international exploits.

Therein rests a problem in the opinion of this columnist. In these times of falling standards and the "I'' being placed on a higher pedestal than the "we", school administrators need to exercise due caution. They should not be sending a message that representing your country is of a lower-level status. What are you saying to your students other than, "school first, country second" when you give them all the support for school engagements but abandon them in this "don't care" manner when they try to take their skills to the national level?

Corcho has, undoubtedly, been a contributor to the high-profile Calabar is having in the schoolboy track and field marketplace, so one should view his stance as a transient moment of irrational thinking. He should now do a rethink, and, along with other responsible in-house voices, of which Calabar is not lacking, arrive at a decision that is more supportive of the nation's cause.

The joy and glory of an Olympic or World Championships gold medal by a former "Here, Sir'' student, should not escape him. He needs to set the necessary guidelines, but not deny those who attempt to progress to the higher level, the use of the new facility.