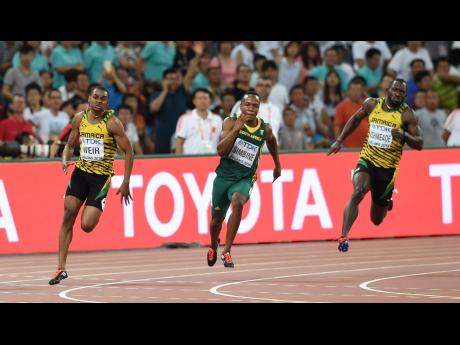 It has been a good year for South African speedster Akani Simbine, who arrived in the island yesterday afternoon ahead of Saturday's JN Racers Grand Prix as one of the most in form sprinters on the planet.

Simbine, who recently won the 100m title at the South African Championships before running second to close friend and Olympic 400m champion Wayde van Niekerk in the 200m, won seven of his eight 100m races so far this season and four of his five 200m races. Despite most of those races taking place in South Africa, Simbine did score a big win at the Doha Diamond League meet, clocking 9.99 seconds to beat the likes of Asafa Powell, Justin Gatlin and Andre De Grasse.

The Olympic finalist says he now feels like he is among the upper echelon of international sprinting and is looking to continue that improvement at this Saturday's meet inside the National Stadium.

"I feel like I am and I just want to keep improving as I grow and mature in the sport. I use every opportunity I get to learn and become a better sprinter," Simbine told The Gleaner in an exclusive interview.

"It's been a really exciting start for me this year, and a big confidence booster. I wanted to start off the year on a high and I'm just glad my coach has gotten me healthy and ready to race," Simbine added.

Though all recorded at altitude, Simbine is responsible for three of the five fastest times registered in the 100m so far this season with a best of 9.92, making him a strong contender in the international 100m clash, which also features Yohan Blake, Kemar Bailey-Cole and Keston Bledman.

Simbine, who will be competing in Jamaica and at the JN Racers Grand Prix for the second time, says he is looking forward to sharing in the occasion of Usain Bolt's final race in Jamaica.

"It's going to be really great competing there as I remember the vibe last year and it was exciting and very hyped up. So this year in Bolt's farewell meet in Jamaica, I'm expecting it to be more exciting and electrifying," said Simbine.

"I will be bringing out my best. It's always exciting for me to go out on the track and get that opportunity to race, so I will bring my best."

Simbine finished fifth in the 100m final at last year's Olympic Games in Rio de Janeiro with a 9.94 second run.