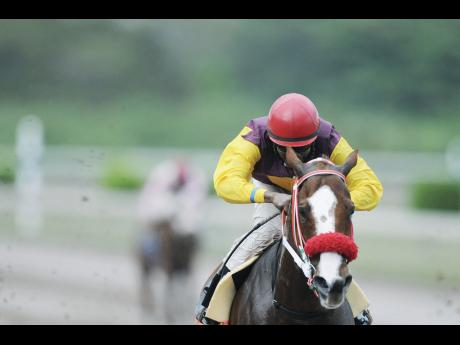 TALENTED TONY K has the scale against him repeating his heroics of two weekends ago when he made all with Dick Cardenas to win the 1100-metre Lotto Sprint on Governor's Cup Day.

However, POKER STAR, who has benefited from an 18lb swing after finishing three and a half lengths behind TALENTED TONY K, will have to run his best race since returning from injury to capitalise on his good fortune at 1000 metres straight in this afternoon's seventh race.

The horse with the speed, pedigree and form at the distance is Dwight Chen's CRUCIAL APPEAL. The seven-year-old chestnut gelding is race fit and can match any of his rivals for speed. He won at the distance in 56.4, returning off a four-month lay-up in March, carrying 126lb, and can certainly repeat with 123.

In his May 10 comeback race, returning off an eight-month lay-up, POKER STAR, breaking from gate five, was hindered shortly after the start by CRUCIAL APPEAL, who swerved violently to his left from stall eight.

That was a valid excuse for the former sprint champion ending up fourth, beaten four lengths by ANOTHER BULLET and finishing a quarter-length behind third-place CRUCIAL APPEAL.

However, he suffered no interference in the Lotto Sprint, carrying 120lb, outsped as he chased TALENTED TONY K down the backstretch before weakening into fourth a furlong out, eventually finishing, next-to last in fifth place.

Up to a year ago, POKER STAR facing that bunch would have been a foregone conclusion, raising questions about his form since returning from injury.

CRUCIAL APPEAL hasn't raced since May 10 but is at home at the distance and has consistently beaten TALENTED TONY K at various distances, including 1000 metres straight, running heavier than the six-year-old on each occasion.

Reporting 16lb heavier today, TALENTED TONY K will have CRUCIAL APPEAL, UPPA TUNE and POKER STAR keeping him honest every inch of the journey. CRUCIAL APPEAL will be finishing strongest in deep stretch and should get the better of POKER STAR.