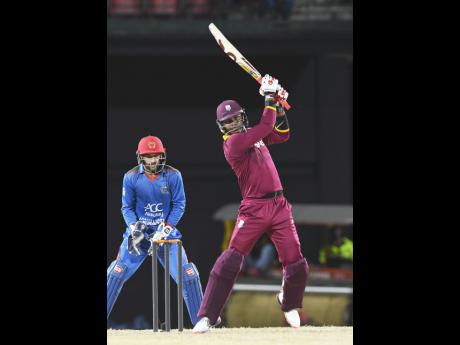 File
Marlon Samuels on the go during the third and final Twenty20 International match between West Indies and Afghanistan at Warner Park, Basseterre, St Kitts on Monday night. 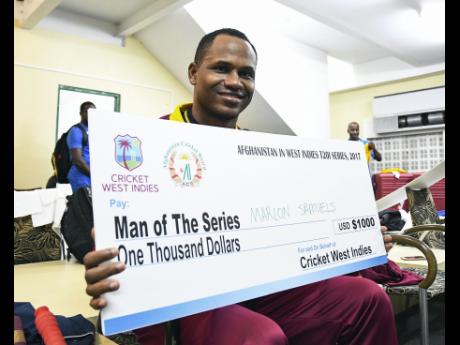 WICB Media Photo
Marlon Samuels was named Man of the Series after the third and final Twenty20 International between West Indies and Afghanistan at Warner Park, Basseterre, St Kitts on Monday night.
1
2

Chasing an uncomplicated 147 for victory at Warner Park, the hosts reached their target with four balls to spare, with the right-handed Samuels finishing unbeaten on a superb 89 from 66 deliveries to earn Man of the Match and Man of the Series honours.

Jason Mohammed ended on 23 not out, adding 65 with Samuels in an unbroken fourth-wicket stand which required 39 balls.

Outstanding rookie seamer Kesrick Williams had earlier grabbed three for 34 to help restrict Afghanistan to 146 for six off their 20 overs, after the Asian side threatened a large total following a frenetic start.

Mohammad Nabi blasted 38 off 30 deliveries, while opener Noor Ali's exciting cameo 35 required all of 19 balls. Wicketkeeper Shafiqullah contributed with an entertaining 25 off 15 balls.

Afghanistan were in early trouble after opting to bat, when opener Javed Ahmadi perished without scoring to the second ball he faced, plumb leg before wicket to leg-spinner Samuel Badree in the second over with the score on 14.

Stumbling at 57 for three in the ninth over, Afghanistan were propelled by two key partnerships. Nabi thumped a pair of four and sixes in adding 39 with Karim Janat (eight) for the fourth wicket, while Shafiqullah carved out three fours and a six in putting on 30 for the sixth wicket with Najibullah Zadran (10 not out).

Samuels arrived, however, to destroy any hopes the Afghans harboured of pulling off a consolation win.

Playing with gay abandon and with his trademark power and timing on full display, the Jamaican struck nine fours and three sixes, while adding 61 for the second wicket with Evin Lewis (19) and another precious half-century with Mohammed.

The hosts won the opener last Friday by six wickets and the second match on Saturday by 29 runs under the Duckworth/Lewis method in a rain-hit affair.

They face Afghanistan again on Friday in St Lucia in the first one-day international of a three-match series.