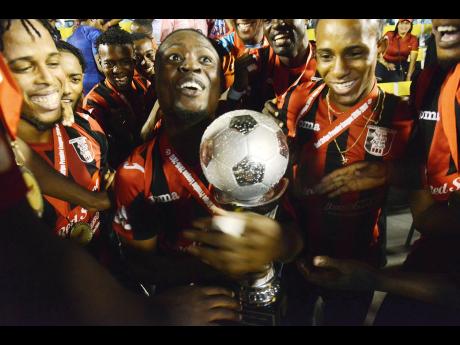 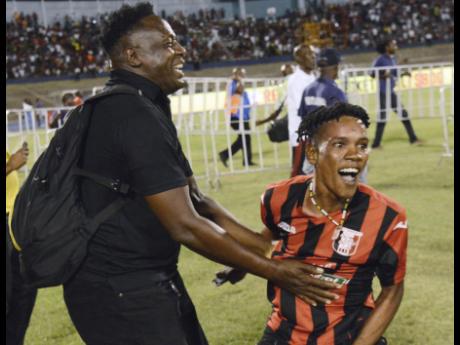 Rudolph Brown
Arnett Gardens' coach Jerome Waite (left) celebrating with one of his players after the Trench Town-based club won the Red Stripe Premier League at the National Stadium on Monday night.
1
2

After winning the national club title for the fourth time, long-serving Arnett Gardens FC coach Jerome 'Jerry' Waite said his current team is his best ever.

"This is a special team. The team was written off and came from nothing to something. It is the greatest local team in my book. I told them that they are going into my history book. They have been through a lot. There was the pay dispute last year, which affected the team's performance. Then players left the club and others came in," an emotional Waite told The Gleaner immediately after Arnett's 2-1 win over Portmore in the Red Stripe Premier League (RSPL) final on Monday night at the National Stadium.

"The players showed mental strength, resilience and determination after starting well. Then they went into a lull. We were written off. Now, we are champions. It was not easy after the internal problems. We worked on the mental aspect," he explained.

"The team finished the regular season in sixth spot then beat last season's champions - Montego Bay - in the quarter-finals, knocked out regular season winners Humble Lion in semi-finals. And we beat Portmore in the final. It was tremendous. They are a special group," Waite said.

In the final three days ago, Portmore got off to a good start when Maalique Foster netted past Arnett's custodian Damion Hyatt in the second minute before the crowd settled.

Arnett earned a penalty, but their top marksman Fabian Reid's shot was saved by Portmore's goalkeeper Shaven-Sean Paul, who dived to his left and blocked.

Central defender Ranike Anderson levelled for Arnett in the 55th minute in front of an estimated 20,000 supporters. Marvin Morgan produced a special goal ten minutes later pouncing on a loose ball which came from his own throw-in, connecting his right foot fiercely with the ball from the left corner of the penalty box to rattle the net behind a hopeless Paul in the Portmore goal.

It was a goal of quality that deserved to win any match at any level.