'You are my hero' 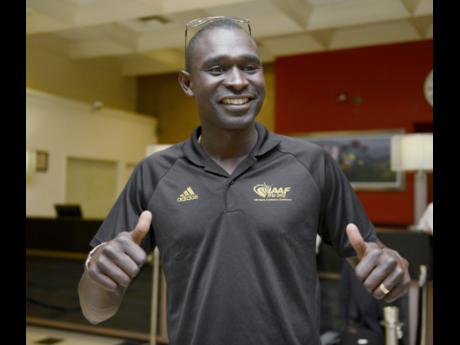 Multiple Olympic and World Championship gold medallist David Rudisha, who arrived in the island yesterday for Saturday's JN Racers Grand Prix, has said that he is happy to be a part of the celebration of Usain Bolt, who he describes as a "great hero," on Saturday.

The 800 metres world record holder told The Gleaner that Bolt inspired him as a younger athlete, looking to establish himself as one of the global stars of track and field.

"Usain is a great athlete and he's our role model," he said. "Ever since when I was getting into track and field as a young athlete, we used to see him and we admire him. He's a very friendly and a very good athlete. We all love him because of his achievements and what he does out there in track and field."

The Kenyan said Africans are very interested in Jamaica, especially because of Reggae music and he is looking forward to immersing himself in its culture in his time here.

He described his form as being "great," but said that after arriving yesterday afternoon, he just wanted to do some light work on the track to get ready for Saturday.

"I'd like to go to the track and just do some jogging and relaxing and see how things will go and I'm just looking forward to improve from my last competition in Shanghai."

Rudisha's season's best is 1:45.36, which he set at the Shanghai leg of the IAAF Diamond League last month, but he said one of his main aims this Saturday is to better this time.

"Definitely that is my aim (to improve the time)," he said. "I'm looking forward to improve on that because since 2013 (or) 2014, I've always been starting a little bit around that time, 45, 44, and then improve on that before the World Championships. That was my first competition this year, so this event, if everything goes well, I'm looking forward to improve for about a second or so."

Rudisha, who set the 800m world record time of 1:40.91 at the London Olympics in 2012, said that although he is unsure he can better the mark, he hopes to, as London is a city that he considers special.

"I can't really say right now (whether the record can be broken there) but I'm looking forward. London is one of my special cities. It's where I won my first Olympic title and broke the 800m world record that is still standing today. It's somewhere that I love most and I'm looking forward to going back there."