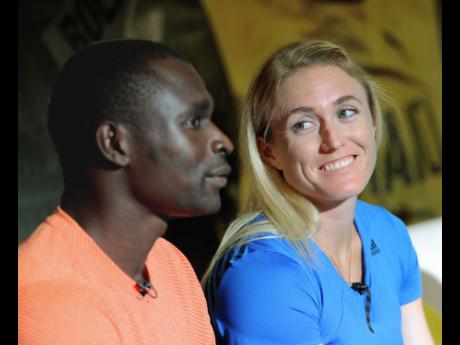 With the JN Racers Grand Prix only one day away, some of the meet's headliners have weighed in on what to expect on the evening from them, whether it be world record performances or simply making Usain Bolt's final meet in his homeland a memorable one.

When asked about the possibility of bettering his world records, Usain Bolt told his audience at the Grand Prix's official press conference that at this point in his career, he is not too bothered about trying to go faster than he has already done.

SEASON FOR THE FANS

"I've already said it - this season is for the fans," he said. "People always wanna see you break world records, but the fact is I'm the world-record holder, so there's no reason to wanna break the world record.

"I always try my best, I always try to go out there and to push myself, so for me, this season is all about just trying to win, continue winning, and end my career on a winning note. That's really my focus this season."

Many time Olympic and World Championship 200m gold medallist Allyson Felix said she just wants to enjoy herself and take in the atmosphere of the event.

"I have no records to be breaking so I'm just taking it one step at a time," she said. "I'm just happy to be back. I love Jamaica, I love competing here. It's always so much fun and I know that it's going to be a special night."

David Rudisha, the 800m world record holder said: "I know people love seeing records being broken but being honest, it's always tough to see a world record every time. But we're gonna give our best. I'll be following in my father's footsteps. It's always special because my father was here for the Commonwealth Games in 1966 so I'll give my best."

Australian former 100m hurdles Olympic and World Champion Sally Pearson said for her, the moment is just about honouring Bolt, who she said has done a lot for track and field.

"I definitely wanna show that I'm still around, but at the same time, I think, like most of the athletes here, I just want to salute the legend and give him a farewell from athletics," she said.

"I just need to focus on my national record before I can think about that," he said. "We want to give a show for Jamaica and for Usain for what he's done for us and the example he's set for us."