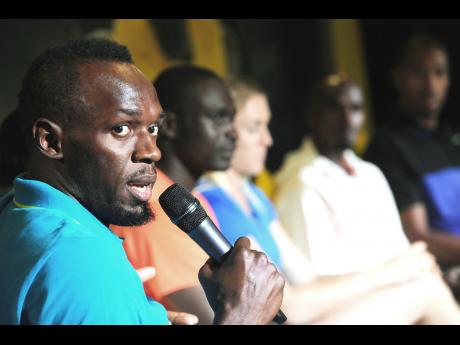 World's fastest man, Usain Bolt, has said that he is looking forward to what he expects to be an emotional send-off when he runs his final race on home soil at the JN Racers Grand Prix at the National Stadium tomorrow.

Bolt shared the stage with Allyson Felix, David Rudisha, Sally Pearson, Mo Farah, Christian Taylor, and Wayde van Niekerk in a question-and-answer session at the official press conference ahead of the meet yesterday at The Jamaica Pegasus hotel in New Kingston.

He said he is looking forward to the energy his fans will provide at the National Stadium, which organisers said they expect to be filled to capacity.

The multiple Olympic and World Championship gold medallist also spoke about the motivation he got from Jamaicans, as a whole, to help him to do well for the country.

"For me, I live to make my country proud," he said. "When I was growing up, my role models were Don Quarrie, Herb McKenley. I watched these guys dominate and work hard (to) make their country proud. I just wanted to be like them.

"Growing up, I got a lot of love, I got a lot of push, I got a lot of banter also from the country itself. But it was always love that allowed me to work hard and to be like the great Bob Marley himself, just trying to make my country proud and put my country on the map. I think I'm a legend. I work hard, I've done everything I possibly can do to prove myself as one of the greatest athletes ever."

Bolt said he knows the public will be showing up to see him at his best tomorrow and as such, he said he will try to not let emotions get in the way.

"I don't know how to feel. It's my last time in front of my home crowd, so I don't know how the emotions will be. I know they're gonna be loud. I'm just going out there with an open mind. Just trying to do my best as always and put on a show for them because that's what they're coming out there to look forward to. We'll see what happens. The fans in Jamaica know that when I show up, I always show up at my best. I always go out there and give my all. I always try to make sure they're happy because they're very hard to please, but I try my best," he joked.

Bolt will line up on the track in the special 'Salute to a Legend' 100m race against friends and relay teammates Michael Frater, Asafa Powell, Nesta Carter, Jevaughn Minzie, and Nickel Ashmeade, as well as Antiguan Daniel Bailey and Ramon Gittens of Barbados.